The set of "Honey drops"

The set of "Honey drops"

The following examples of jewelry using rhinestones in twining is the set consisting of bracelet and ring called "Honey drops". We called it so because the crystals taken to the Central element, is the color of melted milk, and beads of gold. This combination is like a transparent drops of amber honey keeps the sun's heat and preserved flowers honey plants. 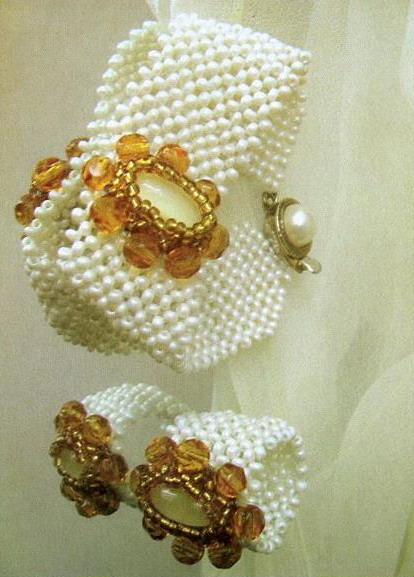 The basis of these decorations made of beads of milky color that blends well with the Central elements. The beads selected are of good quality so that mesh-based looked the most advantageous. In fact it has been used for these decorations and is almost the same as in the previous decoration. Added closing sections, and it is made solid, in the form of a rectangle. The crystals are different here — they're oval. You need to refer to the braiding. In this set, the most important is to choose the color all kinds of materials. The clasp is also consistent with a common color — it is made of gold-tone metal inserted in the middle of the mother-of-pearl bead.

To begin execution of the decorations you need with a Central element (schemes 5 and 6). In this model, the wrong side of the rhinestone is to be closed by grid basis, so the entanglement can not be done "blind." It will be enough to pull the wrong side of three or four series, just to fix the rhinestone. Recall that the last tightening of the row should be executed from beads with large holes to simplify the attachment of crystals to the base.

After the completion of the Central element will be clear what width to run the Foundation. It should be slightly less than the vertical dimension of the rhinestone beads, arranged in more-pointed parts of the oval. During the execution of these ornaments after tightening the line on the reverse side do not need to fill in. You need it for attaching a rhinestone to the base.

The implementation framework in the form of a grid with cells of one lateral bead have already met above. You can specify what is allowed here, use twine, as beads are small and the thread will be visible. A fairly wide mesh, for example, in seven rows, as we do, will not lose its form when being executed on the hard line. Of course, the first series to weave on the line harder than using threads. She's bristling and confuses the picture, but still recommend you make the effort and try the same fishing line. Already on the third row your difficulty goes, and the Foundation will acquire a nice elasticity bead tape.

Closing sections, as you know, only needed for the bracelet but not the ring. As, however, and clasp. We note here that its not recommend to choose equal or greater than the size of the rhinestone in twining. Try not to shift the focus.
In itself already quite attractive. But we close her rhinestone twining, who is the main in the whole composition. Mount produced in the ordinary course of sewing the Central element in a certain place. Try to place the rhinestone in the middle of the rectangle bases, to avoid bias in one direction or another. Since strengthen have through the beads around the circumference, and beads placed with a reversal pattern, such bias is likely. If this happens, we advise you to take the time and effort to re-mount. After this final Assembly should be crowned all the work!

Now a few words on the implementation of the ring. The peculiarity here is that the plot basics are quite short. If the weave of the rectangle of the bracelet, requiring the completion with the closing sections, you need an odd number of rows, the restriction is removed. In our case, the width of the ring is defined by six rows. You can run the net framework either in horizontal or in vertical direction as you prefer. When it reached the required diameter of the ring equal to the circumference of the finger you plan to wear it, the mesh bases need to close. Suggest you make the ring a little loose, because it is high enough and will not slip. Believe me, it is possible to avoid rework later. At the end fasten rhinestones to close the section of the joint. This will strengthen it and hide flaws, if any. Mount with such a small depth, even when the needle is placed inside the ring, of course, very time consuming. Yes, you need to fill in the line work. But it seems that the result will fully justify your efforts and expectations.

The kit that we provided you with, can be supplemented with a necklace in the form of barocci. Of course, due to the use of beads of small size, the implementation will be more labor intensive. However, the combination of wax beads and amber beads and a rhinestone so impresses with its refined simplicity that will surely give your fantasy a new boost.