This product we named so because the Central element is a rose quartz bead twining. As a rule, the height of the convex part of the stone more than the crystals, so a tightening of the ranks for the frontage will need more. Although in this case the stone was almost round at the base, and this made things easier. A lovely pink shade translucent stone managed to emphasize here beads of the same pinkish tint. The hole bead has a metallic coating that gives it a silvery Shine. Besides, entanglement is completed at the outer edge of the transparent faceted beads, which blend well with the stone. 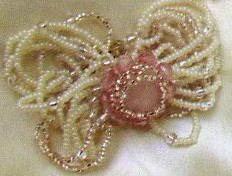 Base this bracelet is made from strands of beads of different colors. They are collected in a free beam, which is tightened with a mounting stone. Ready clasp, mounted with the help of beaded loops at the edges of the bracelet, also fixes the bundle of bead strands left and right.

First the stone is exposed to the plexus. Here recommend you not to close before the end of the wrong side of the stone tightening ranks. Because it is almost transparent, and transmitted light will be nice to play in its depth, shading streaks and blotches. This will contribute to the basis of not having a solid structure.

Running entanglement as above for the oval rhinestone. The mounting loop must be woven only after the basics. The stone compared with the crystals with the same footprint will be much harder. Therefore, the bundle of bead strands must have sufficient thickness to carry the increased load. For this purpose we recommend mounting a loop to perform chain of cells, as in figure 18. Or let it be two or three stitches of single beads. But first about based.

You can offer several variants of weaving bundle of bead strands for the base of this bracelet, all of which are performed on the thread. One of them can be seen in the finished product, in particular in the Czech jewelry.

On a thread the required length of the strung beads, then all the threads are pulled together in a bundle in a large busine. This can be supplemented with a metal shaped Cup. This tightening busine subsequently fastened the clasp.

We thought this doesn't quite fit. First, attention will be distracted from the Central element. Second, for tightening large beam capable of carrying a heavy stone, it will take too much bead. All the above prompted us to use another method to perform the basics.

We decided beaded strands to close into rings. If you fold them in half, the diameter will be equal to the length of the bracelet minus the size of the clasp. Depending on the size of the stone and size of beads you can perform seven or eight of these rings, which give, respectively, 14 or 16 bead strands. Rings are basically the bead milky color, but added two or three rings of beads used in twining. In addition, through the small gaps in the bead rings added to the beads, similar to metallic beads to lightly break up the monotony of the basics.

Ring is necessary to perform the same size. As he reached the thread linked at 2-3 knots, the ends it is put into the work and cut. When the rings will be a sufficient number, they pulled together the beaded loops to which is attached the clasp.

Beaded loops, unlike the threads themselves must be tough and durable. On this basis, for loops need to take the line. She put on as many beads to put all of the bead strands, but strapped they were not too tight. End loop should bead used in the rings. After beads can be fastened through the clasp beads. They, in turn, should be much, what is the number of lashing rings in the closure (scheme 1).

Line after fixing the zipper noise again through the beads of the loops associated to 4-5 knots, the ends dressed again in a loop and cut. Likewise, on the other hand and fasten the remaining clasps. Once again, at this stage, the Central element of the bracelet is a decoration, it is ready to eat. The final effect we're putting the stone in twining, carrying the fastening eyelet. Ready twining on the reverse side using the remaining ends of the line, weave a chain of such length that had not very tight and wrap it around the base. The stone should be able to move around the bundle of bead strands, and they, in turn, be placed freely on hand. There is no fear of excessive freedom: the beads on the rings will not allow the stone to descend into the undesirable situation, and the total thickness of the bracelet at the place where the Central element will not make disharmony. Loop fastening its second end to join to the entanglement with the wrong side. At the end of the line associate, dressed in a loop and cut. Now you have another ready-made jewelry with bead braiding stone.