According to the scheme used in the bracelet Contrasts using other materials, you can make a set. It consists of a bracelet and a necklace, which, of course, plays a major role and has a Supplement in the form of suspensions. Since this decoration is longer than the bracelet, makes no sense to do it very wide. Enough to be two rows of beaded netting. On the surface we have placed multiple groups of beads on the leg of only one type of material. Beaded bristle is monochrome, from one kind of beads. All these simplifications made in order not to overload the composition of jewelry and should not divert attention from the suspensions. You probably already have seen the description of such suspensions in the literature, it can be quite popular decorative element. We did it a little differently, then you'll see it. Bracelet simply repeats the pattern belt necklace without pendants. The set is woven on a string.

The scheme of decorations, you need to compile separately for each, since the distance between the groups of stones should be different. Moreover, the strip foundations necklace one of the groups will be located exactly in the middle, and the remaining parts are still in two groups at equal distances from each other and from the edges (figure 1). On the bracelet just have two groups of stones symmetrically left and right of the middle.

So, performed as described above, the basics of jewelry, consisting of two rows of beaded netting. Closing sections, thus, will consist only of one cell, required to run a bead clasp. As you can see in the illustration, such a closure is used only in set with garnet stones. Another necklace, made in the same way, and includes pieces of jade and bronze color beads, ready set buckle. The basis of this decoration does not require the guard cells, since the two fasteners retaining rings joining one another and to the rows of the framework.

When all the work on implementation of the framework, including the clasp, will be performed, you can begin to weave decorative items.
As in the above products, finishing is performed, starting from the middle. The thread in this case, we select the color of the stones, as the mounting bead it will be visible. In a new segment of the thread performed the first Central group of stones, then a bristle in the same manner as described in the previous bracelet. Only here you will need to produce the whole procedure once with only one kind of beads and stones. Here, however, the distance of the weave a lot more in accordance with time and material will also take longer. With this in mind, stock up on enough quantity to avoid interruptions in the work.
After the ribbon jewelry along with decorative items on it you can start to suspensions.

We will explain the principle of completing the suspension, and their number and length, you need to determine, based on the size of the stones and how the necklace falls on the neck line. To begin execution of pendants need in the middle, where the longest of them. On a new piece of thread with two needles derived from the lateral beads of the bottom row of the grid, put a number of beads used to the basics, to the centerline of the suspension (scheme 2). This number defines the length of the suspension. To close the centerline required by the stone and another the final bead. Now, back to the stone, you can try on jewelry in order to verify the magnitude of the suspension. It should be noted that with the establishment of additional finishing elements on it, the suspension will be a little shorter. 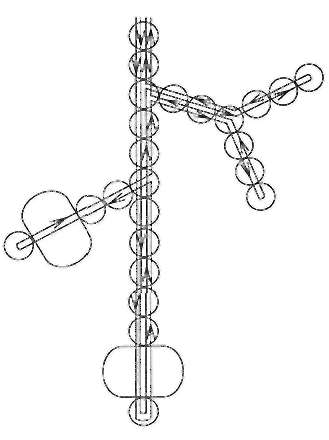 If the length suits you and in the remake, there's no need for running it on. To do this, back at the beads centerline optional extra pebbles on the leg of one of the beads and the bristles every 2-3 beads. The frequency of alternation of stones and the bristles is adjustable depending on the size of the stones.

If the stones are small in size and sufficient in number, each element of the bristles to complete the stone retaining bead after him. I hope that these small changes you can make yourself using scheme 16.
It should be noted that the suspension is better not to make too thick, let the pebbles are clearly visible and do not close each other. Don't forget that there will still be a suspension and they also need enough space. The stones performed on the thread which at the moment is longer, fortunately we have two of them. Try not to tighten the thread during the weaving harnesses as they should be free to lie down, maintaining a straight axial line.

After performing a Central suspension and go to the next right or the left. These elements are located symmetrically on both sides from the center. We offer you weave an odd number of pendants — one Central and 2 or 3 on either side of her. But you can perform any number of these is very attractive in the decorative elements. Only in the course of fitting, consider the fact that the length of the side hangers will be slightly less due to the fact that the site of attachment of the suspensions takes on a curved shape. The dimensions of the suspensions decrease from the center to the periphery, but the circuit performance remains unchanged, save only the symmetry.