The decoration, which will be discussed in this section, has as finishing elements bead on the leg and dvuhromovo the bristle. Moreover, and beads, and bristle is made of two colors — black and white. For the basis we took the white beads. It will carry a few threads, so it should be of adequate size with large holes. As indicated, the beads were taken in two colors: black and faceted pieces of rock crystal are also in the form of faceted beads. Decoration is done on the thread.
First spin basis along trailing portions and part of the beaded clasp loop and one transparent bead on the leg. The following beads black colors will be done later, but for now we just need to fix the bracelet when fitting.
Then you need to make the scheme of decoration. 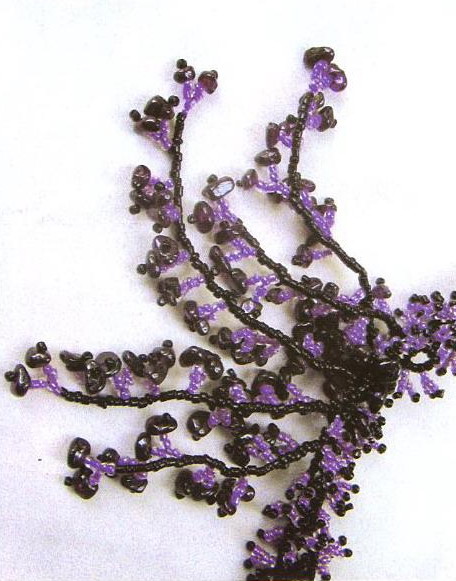 The stones in the bracelet are grouped into diamond-shaped areas in the centre are white beads, and round black. Behind them is a circle of elements dvuhromovo bristles of black beads. All remaining space is filled with a bristle of white.
To locate a diamond of the group, you will need three rows of the grid. In the case of a larger number of rows, it is possible to vary the structure of the group.

In our case, subject to the symmetry and uniformity of location, space bases are placed four groups of two left and right of the middle. From her run and finishing elements, first black and then white.
The above ornament was described the same sequence of finishing elements. Only here the problem is complicated by the use of two threads and beads. In addition, dvojlozkova bristle is woven on two needles.
Based on these challenges, we described how to carry out the finishing elements.
First on the longer end inserted into the middle cut black thread weaves elements of black beads on the stem in spaced locations nearest diamond group. Beads are on a circle, and we return to the remaining end of the thread. Here, wearing the second needle is already towards the edge of the bracelet, running the bristle of black beads. In the same sequence and the following weave diamond band.
Then on the new stretch of black thread and the above sequence mirrored half of the Foundation left without finishing elements. Recall that in the zip bag, you need to add two black beads on the stem. Try to tighten the thread, then on the reverse side it will be less noticeable.
Now it was the turn of white decorative items. Again from the middle to the inserted segment is now white thread running the bristle of white beads in the remaining empty spaces. In the middle of a group of black beads, remember to make the centre of a transparent piece of rock crystal — in fact, it is the highlight of the song. After completing one half of finishing, go in the same order to the remaining. Now ready.
If you manage not to get lost, and we are confident that it will succeed, you will get a beautiful decoration, in which the contrasting color shade and emphasize the dignity of each other. This bracelet is bright, expressive and quite suitable for business wear in black and white and evening dresses.