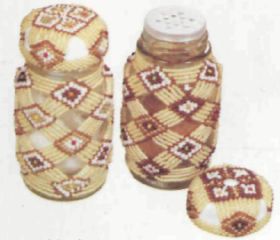 Job description:
The cover on the jar. Start nisana the middle part of the bead of the cover the middle of the bottom diamond (figure 1). * Dial color: turquoise: 9 large for the bottom of the diamond; 9 small; 1 large diamond pattern located above; 9 small. The length of the resulting snisky should be about 40 mm. From * repeat 3 more times. Strung beads gather in the ring. 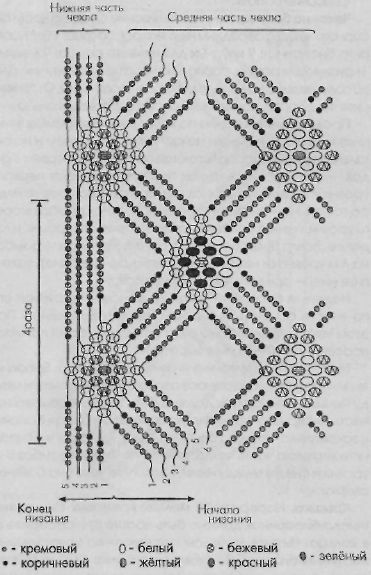 Keep nizana in a circle performing diamonds in the technique of "mosaic" and snisky between them. On the lower and on other levels are located at the 4 diamond. The first 5 rows — this nisana upper halves of the diamonds of the first level and lower halves of the diamonds of the second level. Ranks from 6th to 10th — Nizhnie upper halves of the diamonds the second level and lower halves of the diamonds of the third level, and so on. There will be 5 levels. After completing nisana diamond on the 4th level (and lower halves at the 5th level), attach yarn — the middle part of the case ready.
Wear a beaded cover on the jar. Extend the height of the jar from the top of "neck" to the bottom. The case will fit the jar, and between the diamonds will appear gaps of 10-15 mm in height.
Start nisanu the bottom of the case. Do the lower halves of the diamonds of the first level and snisky between them. Length Snitch should be such that the bottom bead of the cover were tightly wrapped around the "neck" of the jar and secured the cover on the jar bottom. Similarly, follow the top of the case: niiice halves diamond 5 level and snisky between them, securing the cover on the jar top.
Cover. Dial 80 small cream beads (number of beads must be divisible by 8) and assemble them into the ring. Niite method "mosaic" in a circle of small and large beads according to the scheme in figure 2. The resulting ring should be worn tightly on the cover. Further niiice delicate part of the scheme. * Along the upper edge of the ringlet, perform a fragment of the row of 5 large beads. Dial on thread 9 small beads, 1 big bead and 9 smaller beads. Miss small projecting bead on the edge of the ring and pass the needle through the nearest large. From * repeat 3 more times. Keep nizana in a circle. Finished bead "cap", put it on the cover and pull the bottom edge by running it along another row of small cream beads: thread the needle 2 protruding bead, pick up one bead, pass the needle through the next 2 protruding bead, string another bead, and so on. Strapped region needs to go beyond the edge of the cover and retaining "cap". 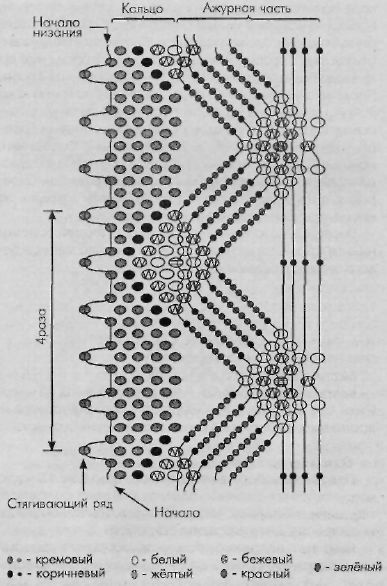 Beaded sheath and "cap" for the second jar niiice as well just use the picture less white and more brown beads.