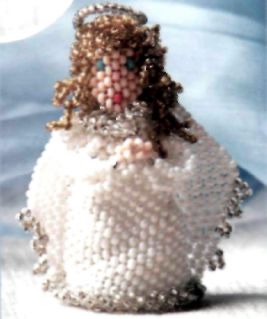 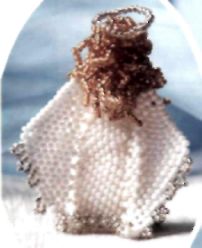 The weaving of the figures starts from the face and torso. They are a linen with a pattern woven in the technique of the "tight weave" (figure 102, 103). To start weaving you need to score twenty-three beads and pass in the 21st. Then you need to recruit one bead and enter into the beads of the first row, via one. Get something like a chain of "x", but the holes in the Central beads are positioned vertically. To go to weaving the next row you need to dial up one bead and go through the last dialed bead of the previous row. Such turns will be performed at the beginning of each row, regardless of where the range starts, at the bottom or top of the netting. Throughout the length of the number dialed bead and pass into the projecting bead of the previous row. The ranks as if woven in one another. When the web is woven, it is necessary to roll into a tube and sew. 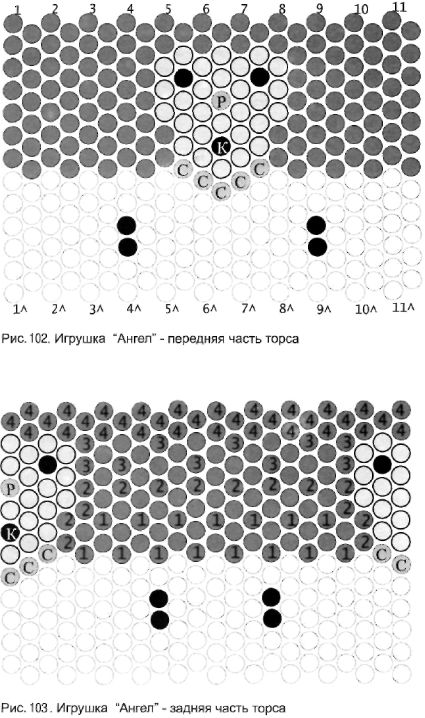 The next phase of work - implementation of the crown (figure 104). Denote projecting beads at the top of the tube as No. 1-11. Between these beads will weave the beads of the first row head. Will ititem one bead between # 1 and # 2. Beads # 2 and # 3 we contract with a thread without adding beads. This technique is called "decrease". Will ititem beads between №№3, 4, 5, 6, 7. Between the beads 7 and 8 perform "decrease". Will ititem beads between №№8, 9, 10, 11, 1. The first round ended. Go to bead, interwoven between # 1 and # 2. It will start the second round. In the second round will be required to do two subtraction. In the third and fourth one. So we weave, until the top closes with beads.

To the head of figures paddlelite curls (figure 105). They podletaya to the beads marked with in the diagram "rear torso". Fasten on the head a halo.

Then proceed to the netting of the skirt (figure 106). Denote projecting beads at the bottom of the tube as No. 1^-11^. Between these beads will weave the beads of the first row of the skirt. Will ititem beads between №1^, 2^, 3^, 4^. Between beads №4^ and 5^ ititem two beads. In the next row, add between them another. This technique is called "addition". In the first round skirt three "additions" between beads №4^ and 5^, No. 8^ and 9^ and 11^ No. 1^. In the second round skirt beads "additions" are considered to be full and between the woven bead. In the second round of "additions," no. In the third round three "additions". Subsequent laps without lagging additions to the desired length. To make the skirt puffier, in the first and third rounds, you can make four "additions". After work adorn the skirt flounce. 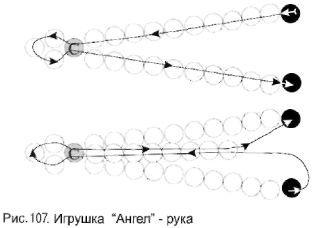