When netting sheep from a series of animal pattern beaded we will use the parallel weaving. 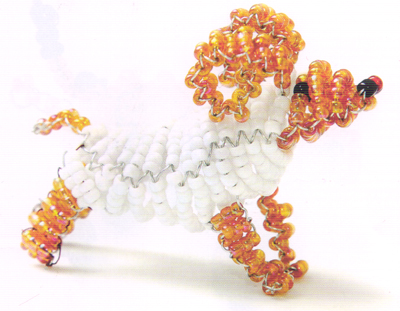 29 - 35th series: strung one busine in each row, the ends of the wire pass toward each other.

43 - 48th rows: similar to the previous rows, in each row should be three beads. 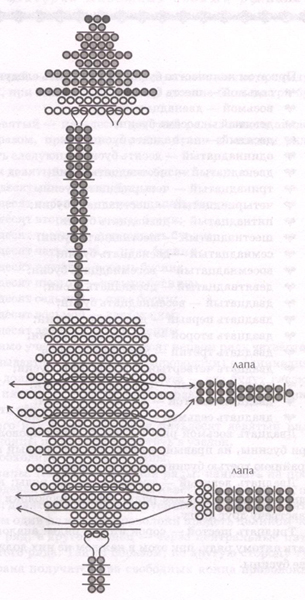 Be aware that in the 51st row of the fourth (if strung on the left wire end) and the eleventh bead should be black - these will be the eyes of the sheep, and in the 59th row, first and third beads should be black. After you run the 59-th row, the free ends of wire to tighten into a knot. Next, you must perform paws. Hind feet.
1 - 8th rows: strung on about dies, threading its ends towards each other, three beads;
9th row: four beads;
10th row: five beads.
Then one end of the wire to pass entirely through the sixth row, and the other end through the Central five beads of the tenth row. Thus, on the other side of the torso sheep get two free end of the wire, they need to use for weaving the second hind legs. To be done in the same way as the previous one, only in reverse order. After the tenth execution of a number of loose wire ends close.
The front paws.
1 - 2nd series: strung three beads on the middle of the wire, the two ends of which are threaded toward each other through two of them.
3 - 6th rows: similar to thread wire through two beads in each row.
7 - 10th rows: to perform as well as 3 - 6th rows, the number of beads is increased to three. The resulting free ends of the wire to pass through the Central ten beads 18-th row and the Central six beads 22-th row. The resulting free ends of the wire on the left side of the torso are used to weave the left front paw. At the end of the 10-th row, the free ends should be closed. Sheep from the series "animals of the beads" is ready.
Add comment