See animals from beads will be able to perform even novice quilters. Uses a simple parallel weave. 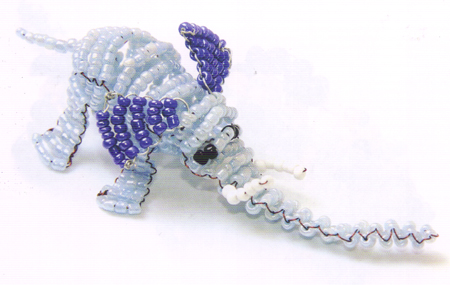 Then go to the weaving trunk.
1st row: string onto the right end of the wire four beads left end to pass through them in the direction from left to right. Then on the left end of the wire to string six beads and wrapping the wire around the sixth beads, thread through the previous five. To do the same with the right end of the wire. 2nd row: strung on any of the ends of the wire, five beads, the other end to pass through them in the opposite direction. The following series also weave with the same number of beads in each row:3 - 6th rows of four beads;
7 - 13th rows with three beads;
14 - 23rd rows with two beads.

Next, weave the ears. In the third and fourth beads 16-th row of the body of an elephant to thread the wire and string on one of its ends three beads, the other end to pass through them from the other side. Subsequent rows, weave the same way:2nd row of four beads;
3rd row of six beads;
4th row- seven beads;
5th row- seven beads;
6th row- eight beads.
The free ends of wire to tighten into a knot, then weave the second ear.