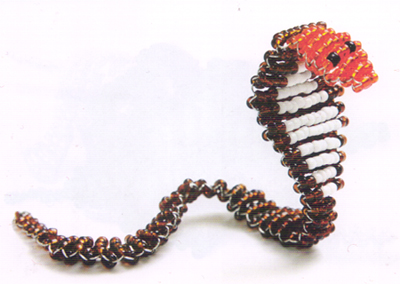 The weaving of a Cobra (snake) bead is simple and quick, since all the ranks are interrelated, continue to each other, which reduces the number of nodes in the garland. Animal pattern beaded is given in horizontal form. Begin braiding at the tail of the snake. 1 - 2nd series: strung on the middle wire, three beads and two of them to thread the wire twice from opposite sides to make a triangle of three beads (one downstairs and two upstairs). 3rd row: strung on the left wire end two beads and through them to thread the right wire end in the direction from right to left. It should look like this to the ends of the wire out of the two beads on opposite sides.
4 - 9th rows: weave similar to the 3rd row.

10th row: on the left wire end to string three beads and pass through them, the right end of the wire in the opposite direction. The principle of netting similar to the netting 3-10-th row, the only change is the number of beads.
11 - 13th rows: weave similar to the 10th row.

26th row: strung on the left wire end five beads and thread them through the right end of the wire towards the left.
27 - 34th rows: weave the same as 26th row.

35 - 43rd rows: weave is similar to the method described above, the number of beads in each row should be the following:
35 - four beads;
36-Oh - three beads;
37 - 43rd rows of four beads.
Thus prepared the tail of the product. Then the braiding smoothly into the trunk of the Cobra.
44 - 45 series: strung on one end of a wire six beads, the other end of the wire to pass in the opposite direction.

Don't forget that when you weave the ends of the wire as would cross in each row of beads. To create the pattern you can choose, for example, yellow and black, green and yellow are other options - it all depends on your imagination. The number of beads in a contrasting color in the ranks should be as follows: two, four, five, six, four, two. Eyes can be black, dark brown or dark green, etc.