The technique of weaving with beads for a cock: the body – of peyote stitch in a circle, beak - harness, tail - twilled, wing - mosaic, scallop and beard – lace weave.

Torso. Weave the belt according to figure 65. Weave belt through the Central part of the egg. Then make the reduction on form. All other parts are lagging in proportion to the torso. 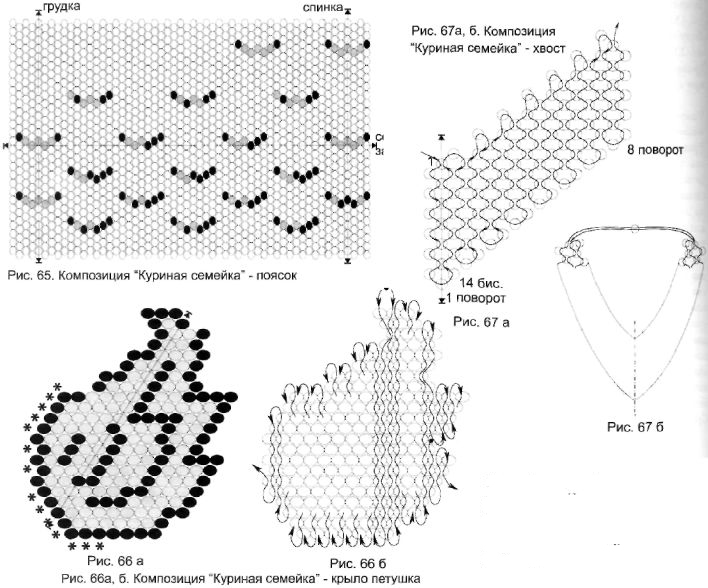 Wing. Weave the two wings of the mosaics in figure 66 (a - pattern wing, b - the sequence of weaving). Wing trudges from point "beginning weaving" first to the left, going down and rising up; then depletes wing to the right.

Wing carefully sew over the beads marked with an asterisk. Axis shown in figure 66B, place horizontally approximately in the middle of the workpiece.

Tail. The tail is composed of three different colored leaves. Leaf braid from the centerline to the right (figure 67a), then the item turn from the centerline and doplatit another part of the sheet from the first beads in the same pattern. Further, in figure 67B connect the side of the leaf, gaining between them a single bead.

Comb. The comb consists of two parts connected along the contour of the additional beads. The technique of weaving beaded scallop-like crochet lace. Each item consists of three fragments. Collect 10 beads close the circle through the first. Paddlelite loop to 8 beads (figure 68A). The transition to the second snippet, do the drawing 68б. Further paddlelite loops and their inner beads gather in a circle, inserting two beads. Make the transition to the third fragment. 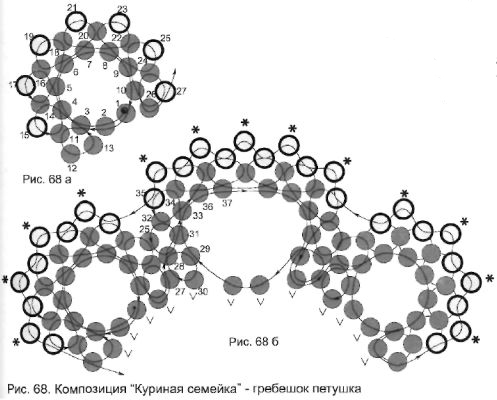 With fantastic comb, through its external contour, adding the beads marked with an asterisk. Weave the second part and paddlelite her beads with asterisks (total beads). Sew the comb to the top of the workpiece for the beads checked.

Beak. The beak of gossip in a circle (figure 69). In the 6th row harness forks, braiding guide not in a circle, and the left to the right, the first spin top, then go along the side beads to the netting of the lower part of the beak. Sew the beak around the circumference, just sprysnuv it into an oval. 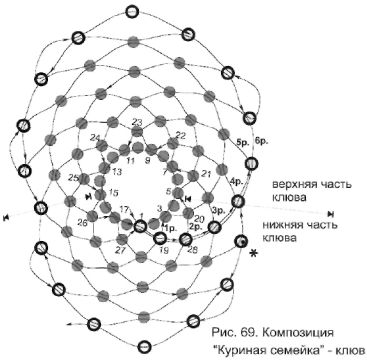 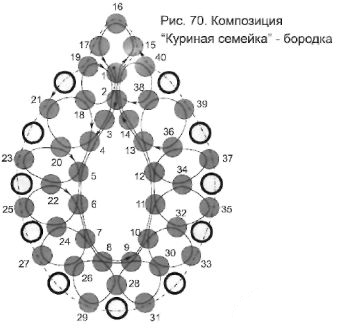 Glazik. Dial the eight beads in the circle, pumpellite them loops in figure 71. In the center woven into the pearl 3 mm. Weave the second eye. Sew eyes to body. 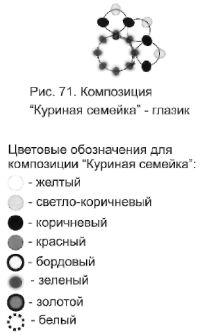 The hen differs in some details. Weave the wings on the figure 73, pumpellite loops to the beads checked. Wing carefully sew the beads are marked with asterisks. 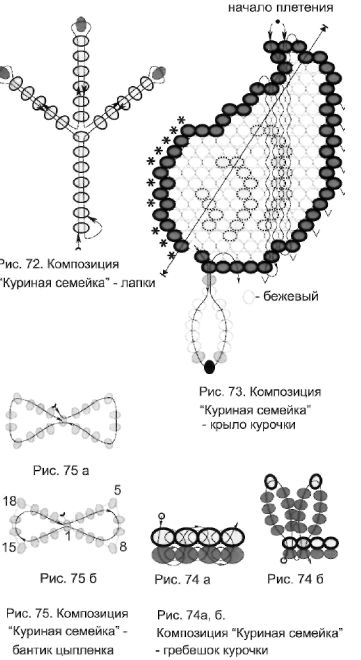 Legs. Weave pattern 72 red beaded feet, walk again on beads, woven details. Sew to the bottom of the balls legs so that the cock had become steady.

Scallop weave seven red beads in figure 74A, b. Ponytail weave following the example of the scallop thirty-six beige beads in the loops will not be nine beads, and eleven-twelve beads (loop for color are the same as in the wings). Garnish chicken with string of beads.

Chickens are very simple, they can be decorated with ribbons, combs, and flower.

Wings of chickens from is loops of yellow beads. Legs weave pattern 72 in proportion to the body. The bow weave pattern 75A. To bow the corners were sharp, re-click on the bow, letting the beads 5, 8, 15, 18 (figure 75б).