So, for Halloween it is necessary to look good, and it is not obligatory to wear themed decorations, if you are a lover of such, of course. Can specially for this reason to create a new bracelet, especially because we just have prepared a detailed scheme of production. 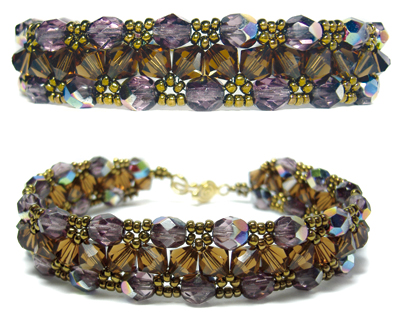 The work begins with the fact that strung on thread or twine but not wire, round bead, another round bead with oval faceted bead and cross the two strands strung in behind the bead. 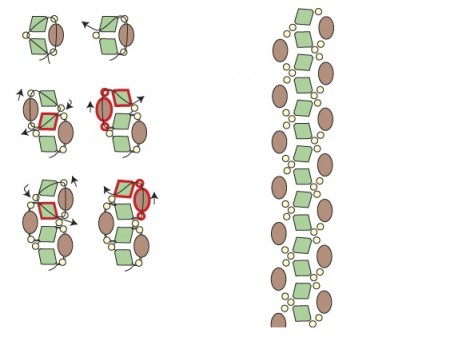 Then the right thread, we will have it working (so what about the left can forget) spend almost the whole series. Look at the picture, and repeat.

The next step also is not particularly complicated: strung on a thread bead, oval bead, bead, bicone, another bead and put it in the same round, they began at this stage. This bead on the diagram highlighted in red.

Then the thread again spend almost the entire series, as a result, she needs to get out of nikonusa fresh series.

In General, now every next step is built just like the previous two, repeat them until, until the strip reaches the desired length. You can make a bracelet, a lock of her wrist and a necklace – there is a substitution tender neck.

After that you can begin to build the second row of weaving. But first, walk again along the lines of, securing the bracelet tightly. The movement of the thread in the diagram trace the beads marked in red and the arrows.

The next series we have consists only of beads, watch and repeat all over pattern. 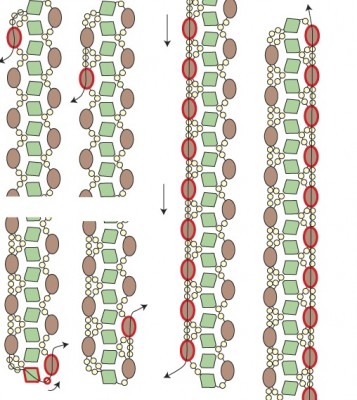 And now it remains very simple to attach the clasps on our product. Here, too, you don't have to invent anything – it shows clearly how best to make the clasp became part of the bracelet. Prepare it thus on each side of the bracelet. 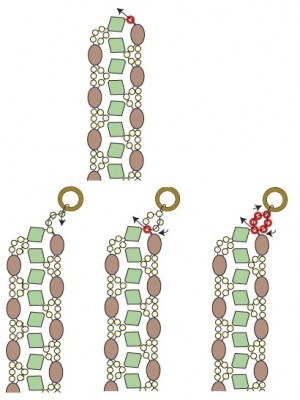