In this decoration as a finishing item to use bead loops and beads on the foot covering the surface of the base diagonally and located at the nodal beads. Running bracelet on a string. Here the problem is slightly more complicated because it is necessary to position the line of stitches and beads, and even added a variety of colors of beads. The main "party" belongs in composition to amber — after all, it is used as part of the bead on the leg. The amber is usually nice smooth shape. It is polished to a Shine, in tune with the Shine of beads, so this neighborhood is very harmonious. In addition, to support transparent roundness of the amber pieces, which we chose as a frame for his beaded loops. 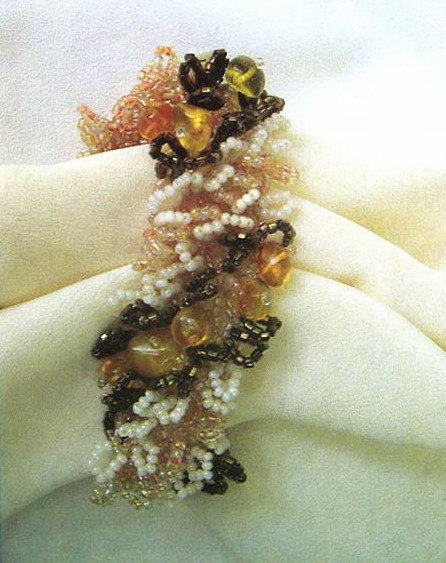 In this decoration, as in all the following, the main technological challenge will be keeping up the pattern. You need to be on paper the layout of individual lines of different colors of beads and amber.
To facilitate the task you want to re-based to the very end, including closing sections and the clasp. In this case, you will clearly see how many cells will include a bubbly rectangle. You can then draw a diagram and place on it all the items.

We proceeded from the fact that the base will be three lines of amber stones and three kinds of beads in addition to them. You can of course choose their own color combinations of beads, as well as their number and location. We can only give some advice. It is desirable to have the amber pieces beads obramlenii contrast, darker or lighter amber. We chose this cabin with fused edges bronze color. It goes for the beads milky color. Between the strips and the edges of the rectangle, where it is impossible to observe the diagonal, neutral transparent beads of yellowish color. He was used to the basics, does not carry the color load and as it sets off the main strip.

Because the decoration is small, we felt justified not to overload the more the pattern finishes. You can add that there was used the bead clasp, it is appropriate to the whole composition.

So, as you can see in the diagram through a vertical midline of the rectangle bases is a Central stripe. On the left and right side of the middle line are two more such stripes. They consist of lines of amber, framed by loops of bronze and milky beads.

To facilitate this it may be advisable to close up one short edge of the filament after the fastener on both sides. As a result, and with one and the other end of the framework will remain a small Segment of thread to secure.

Actually finishing the items are from mid-first to the left and then to the right of it At the beginning of the amber line is inserted a new length of thread, one half of which will be working for the left side and one for right. Weave the whole picture, starting with amber, part of the Central strip. After performing the middle and left lanes remaining part of the base, including closing the station, filled with loops of transparent yellow beads. The thread is fixed on the knots, tucked and trimmed. The same is done with the remaining blank side of the bracelet.

Thus, it is decoration with diagonal pattern consisting of stripes of amber and bead loops. This ornament when touched is warm, unlike bracelets with natural stones. Such a property is inherent in amber, because it is a fossil resin of ancient trees, preserving the warmth of the sun shining on the earth many centuries ago. Nature is carefully preserved for us, it's warmth, and decoration, made of amber, will warm the soul of someone who just look at it.