Job description:
Nisana the little pouch for vases start at the bottom. Secure the thread end of the auxiliary bead or a piece of eraser. Type beads for the bottom line. Run low on this chain "mosaic" (рисунок17а). In the scheme of beads the initial snisky conventionally depicted paler, and added when Nizhnii chain darker. The length of the chain should equal the coverage of the bottom of the vases. Jumper chain (Fig,16). Further niite method "mosaic" in a circle. Figure 1B shows how to move from one row to another, the beginning of a new series are highlighted in a darker color. Beaded sheath should tightly cover the bowl. To do this, when a significant expansion of vases increase the number of beads in a row, stringing when the next series as soon as two beads instead of one (figure 1G). The number, which increased the number of beads highlighted in a darker color. The point of adding beads in the figure is marked with the letter A. When narrowing vases take away the number of beads in a row, passing the thread right through the two beads in the previous row (figure 1D). The number, which reduced the number of beads highlighted in dark color. Point subtraction of the beads in the picture is marked with the letter B.
It is very important when you change the number of beads in a row to ensure that the pattern is not disrupted. 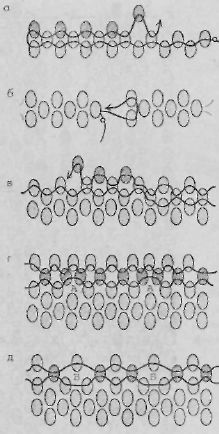 
The scheme of an ornament of red vases are shown in figure 2. The beads, strung together to increase or decrease the number of beads in a row, is connected to the circuit line. Do the last row along the top edge of the vase green beaded, threading the needle right through the three beads of the previous row. Pull the thread to the edge of the case wrapped inside and covered the edge of the neck of the vases. 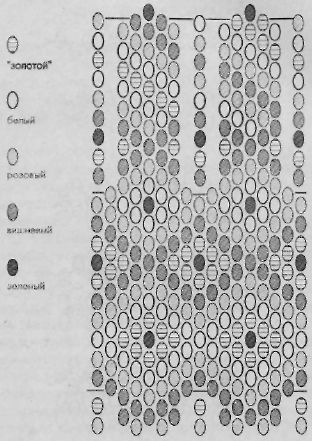