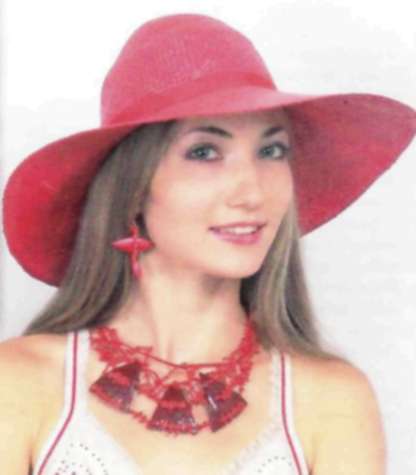 Corals are the skeletons of colonies of marine organisms of coelenterates consisting of calcite or aragonite with an admixture of oxides of iron and manganese.

Since corals associated with many legends and superstitions. So, in Egypt, the coral was used for protection from evil eye, evil spirits and temptation. It is often hung to the cradle of the baby. He was also a talisman for travelers, because it protected them from dangers and disasters.

According to Ayurveda, corals purify the blood, stop the inflammatory processes.

They also has a calming effect on people who experience negative emotions - anger, hatred and envy.

If you wear coral on the neck, they will strengthen memory and relieve nervous diseases.

In addition to the corals natural color, today often ennobled - they impart the desired color using special dyes. However, the dealers appreciate red Ukrainian "numista" of our grandmothers, as the corals, of which made these ornaments, and the outside and inside of the same color.

Red corals carry the Yang energy of Fire, and pink of course, Yin - warm and warming. The corals in the form of twigs still contains the energy of Wood, which fuels Fire. They affect the throat chakra (Vishudha), so help with the sore throat, as well as facilitate the work of the speaker.

Corals can carry representatives of all zodiac signs, except Capricorn.

12. Mylar thread or fishing line with a thickness of 0.2 mm. 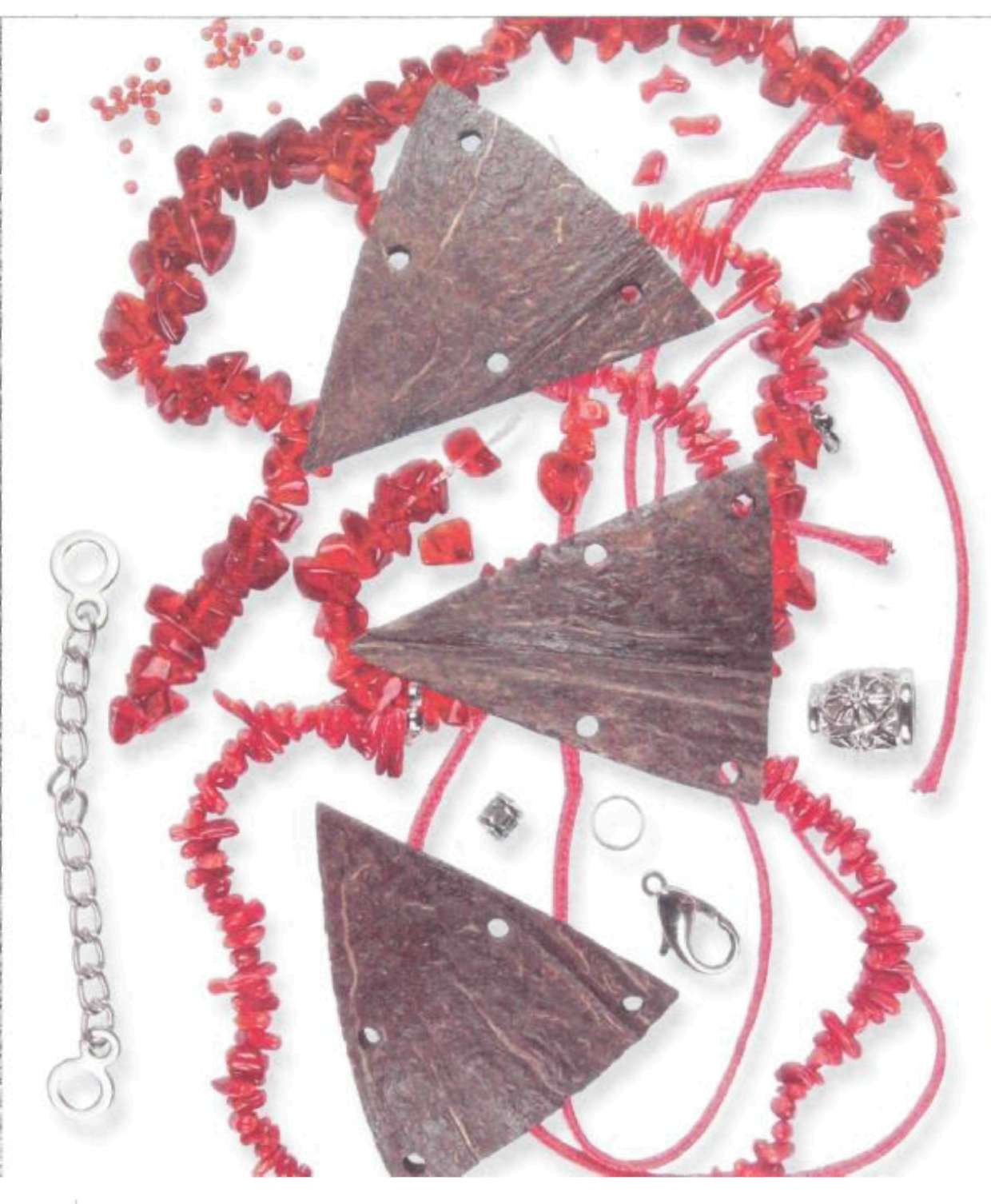 Cover with paint or nail Polish triangles of coconut shell on the obverse and reverse sides. After the first coat is dry, apply a second.

Cut soutache into 2 parts: one part with a length of 0.6 m, the second - 0.4 m Firmly associated with a thread length of 2 m the two parts of the soutache at a distance of 0.7 cm from the edge.

Then thread both ends thread into the metal tip. Take 1 metal bead. Then tie a carabiner with a double knot, stretch thread through the metal bead and the tip and again tie a double knot. The ends of the strands (1 m) should come out of the tip. 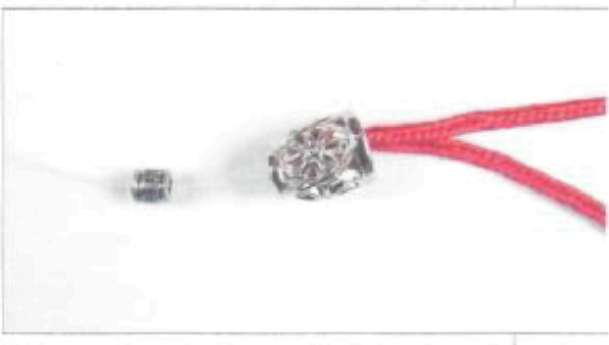 Binded between 2 pieces of soutache 5 times and similar to attaching the carabiner attach the 2nd part of the clasp of the necklace - ring carbine.

Now start stringing the coral fingers and coral beads. On one thread (no. 1) alternately recruited coral sticks and beads. On another thread (No. 2) string the beads, every 7-10 beads – coral sticks, and occasionally, 3-5 cm, 1 baby quartz. Initially, the thread number 2 need to score 7-8 beads - they hide in the tip. 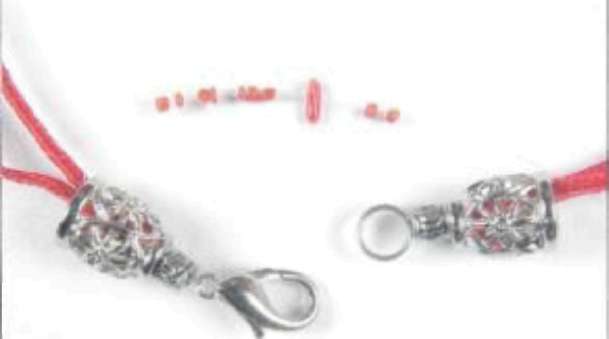 Performed 5 cm necklace two strands, and each of them are holding the needle through the soutache, tying a knot. Start product should look like the one shown in the photo.

Every 5 cm in the middle of the low performed by the thread # 2, and spend such a method: after typing the coral sticks 5 beads, pass needle through the 4th bead.

Well pull the thread. Recruit 6 more beads, enter the needle into the soutache and tie a knot. It turned out the 1st at a sharp angle. Each subsequent low do more and more, while continuing to carry the corners. The triangles of the coconut shell must be laid next to the necklace peaks up to when joining they were in their seats. 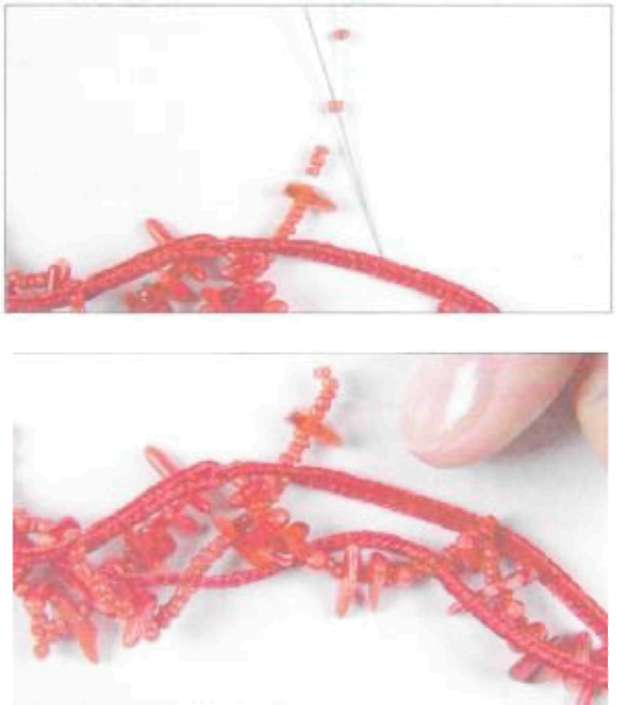 Having made thread number 1 the right side of the necklace length 19 cm, fixed triangles of coconut shell. Passing the thread through the soutache, bead running the length of 5-6 cm and Then hold the thread from the wrong side in the upper right hole of the right triangle and continue to string sticks of coral and coral beads until the length of the low will not be equal to the distance between the upper holes of the triangles. Next, hold the thread from the front side in the upper left triangle hole and well pulled her. Again recruited on a string of coral beads and coral sticks and carry the needle through the bead, then the bottom vertex of the angle. Then again, strung with coral sticks and coral beads. 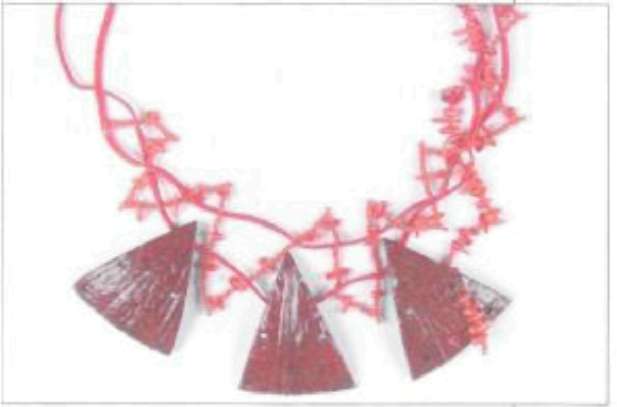 Take the thread to recruit for its middle of the 1 coral stick and fold the thread in half.

Again recruited coral sticks and beads, keeping the distance between the triangles. Also anchoring the other 2 of the triangle. 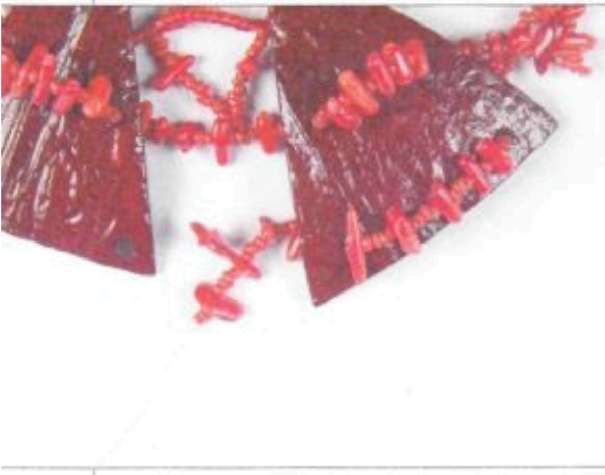 Passing the thread through the left hole of the last triangle, again shared into two. The first of them carry out through 1 coral wand and associated with the second thread with a double knot. The ends of the threads to be cut and burnt with a lighter.

That the unit was more durable and less visible, it is possible to put the pin a little nail Polish. 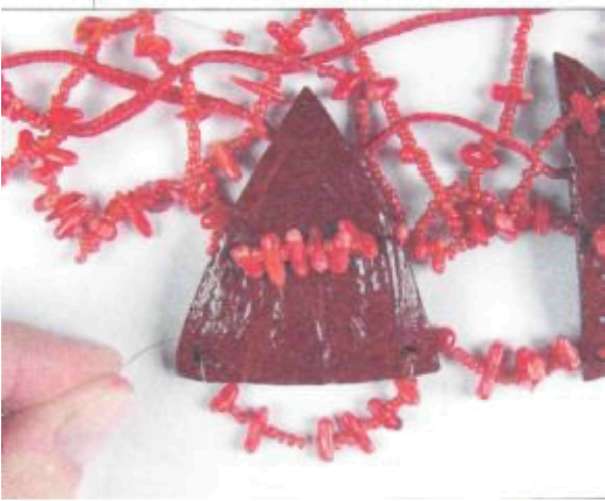 Now fasten the top of the triangles. Tie the thread to the soutache, near the top of the 1st of them. Fold the thread in half and strung a few beads of coral, 1 coral wand (it should be opposite vertices) and again a few beads. Then again, hold the needle through the nearest bead or soutache and make a knot.

Similarly fasten the tops of the two remaining triangles. The ends of the threads associated with a double knot. 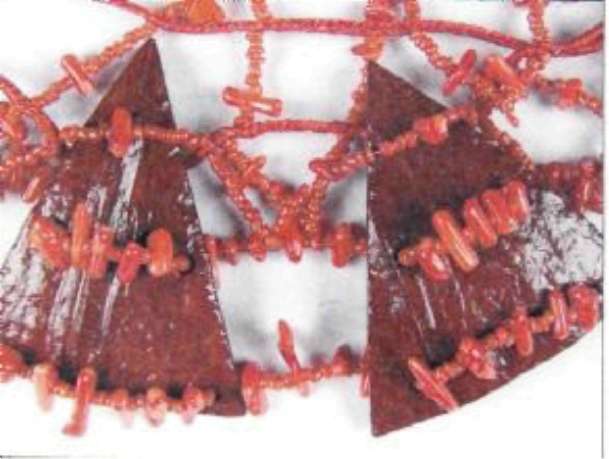 When you are finished to perform thread No. 1 and No. 2 the left part of the necklace, hold them through the tip and a metal bead and attach the thread to the ring with a double knot. Again draw the thread through the metal bead and the tip and again, make a double knot. The ends of the threads to be cut and burnt with a lighter. Attached to the ring metal chain to adjust the length of the necklace.