Continue preparing for the scariest holiday of the year – to All the Saints. And the most striking symbol of this momentous event is pumpkin. So today we are going to embroider a pumpkin beads. 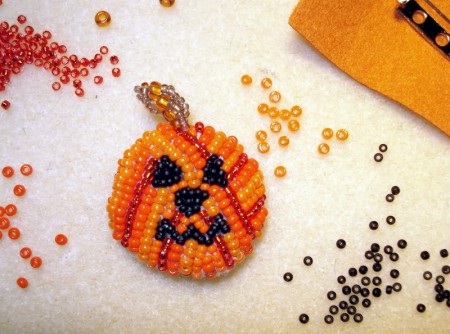 It is noteworthy that in Europe, where we come to this feast, for the manufacture of such lamps used large turnips or beets. However, the Americans instead began to use the pumpkin, which also was a symbol of the final harvest. So the two traditions are tightly intertwined in one, now in another form they were, no one is, especially in our country.

So, to work we need a piece of dense material, preferably of felt, it will serve as the basis for future embroidery. To begin, draw the silhouette of the future of the pumpkins on a sheet of paper. The finished pattern applied to the felt, trace and carefully cut out.

Now it's time to do embroidery. First and foremost we need black beads, which we embroider triangle eyes, nose, and mouth with a zigzag. 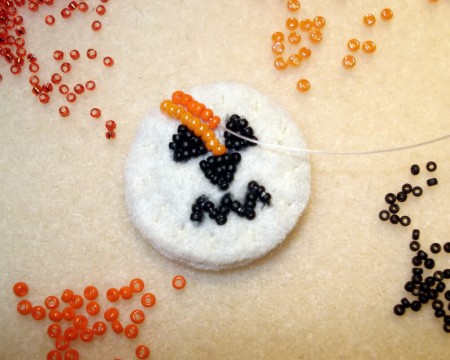 Now not too many left: to take the orange beads in different shades, three or four will be enough. And begin to fill the empty space on the pumpkin in a random order. In our case, the pumpkin looks to be striped due to the fact that the master of the embroidered product the stripes pointing in a different direction.

Now, when the pumpkin is ready, you can put her in the loop and register as a pendant. Or take a pin for a brooch or attach it to the back of the workpiece. And you can just sew or glue a pumpkin on your clothes, bag, backpack, or handkerchief. Would make a great themed souvenir or a part of the outfit. 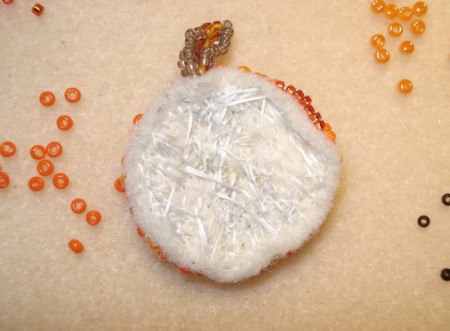 To the wrong side was not visible, if you still decided to use the pumpkin as a pendant, on the back you can glue a piece of felt, cut to size or leather. Most importantly for the selected material – so it does not crumble at the edges.