Bead can weave any animal. But it is necessary to dive into the underwater world, and there you are amazing, and sometimes dangerous creatures. It is interesting to weave the majestic marine life. Predatory sharks, even in a small copy command respect. The size of the finished figures of beads — approximately 6 cm. Netting hammerhead shark bead 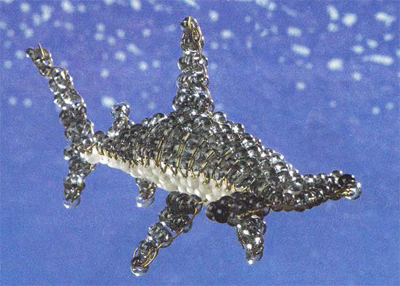 2. The location of the caudal fin should be perpendicular to the hammer in the same plane with the dorsal fin up looks more long caudal fin, down shorter. Next comes the braiding of the pectoral fins and jutting, as if the hammer of the head. When the braiding of the fins and their accession to the body of the shark, follow the diagram. The netting of a tiger shark bead 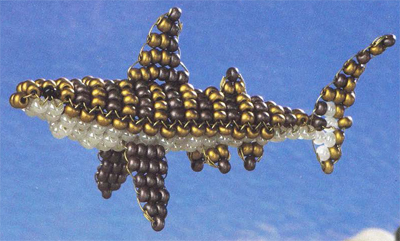 Materials to tiger shark: Execution:
1. The tiger shark is also lagging with the head, thus follow the scheme. In the 15 th and 19 th rows of weave a new length of wire on them you will weave the pectoral fins. Between 39th and 40th rows of weave the new wire, you will weave the tail fin. 2. The location of the caudal fin of a tiger shark same as shark-Motol, i.e. in the same plane with the dorsal fin, the long part at the top. The diagram shows the weaving proper fins and attaching them to the torso figures from beads.