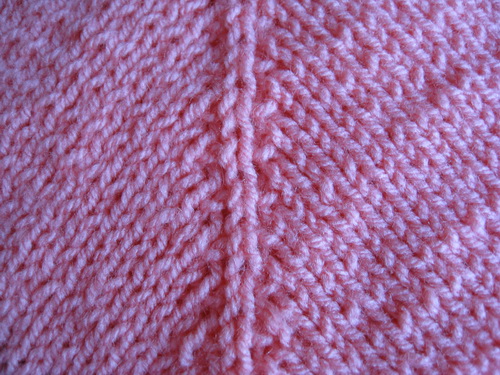 If the connection of the two parts is done skillfully, the resulting loop does not differ from knitted.Often when knitting new products it is necessary to make known the amendment failed of knitted parts. So as not to dissolve all of the product removed only to fail the associated part drawing threads; in this are two parts. Gain loop of both parts on two spindles and correct the mistake, vymazyvaja only one of the two parts; then connect loops of both pieces, using a sewing needle. This method of stitching two separate parts is especially important when repairing old, sometimes grated or torn knitwear. Separately sewing related pieces on shredded, torn, and more thin places the old clothes, they can be renewed and make fit for extended wearing. Way of binding is known difficulties and should be well learned. A way to connect the front stitch: two separate parts of the dial for even number of stitches on the two knitting needles. Following the direction of knitting of these loops, using a sewing needle and a thread, which is associated with the product, begin to sew the two parts from right to left as follows. Introduce a sewing needle with the inner side of the first loop of the lower spokes, remove this loop from the needles and throw it out. Then a sewing needle threaded in the middle of the first loop of the upper spokes, is carried out under the second loop of the same spokes and drop these loops. After that, a sewing needle returns to the first loop of the lower spokes, injected this time in the middle of the first loop, threaded from below into the second loop and drop it. Again enter the sewing needle at the top in the middle of the second loop of the upper spokes threaded from the bottom to the middle of the third loop, which is also dumped, and so on until you connect all the loops. Stretching the threads on the broken place and nalivanii the front loops on a longitudinal basis. When some places are worn knitted clothes completely wiped, them cut out and carefully dissolve some more rows before the advent of reproterol thread; all you should do thus to get a perfect square or rectangle. Thus prepared place sew on a piece of paper and, using a sewing needle begin to hold the longitudinal strands, possibly of the same color; they connect one after the other, resulting in the opening of the loop. Then on stretched threads the sewing needle reproduce the front loop in the following way. Insert the needle into the middle loop of the bottom row, take the first two stretched thread; thread the needle passes over them. The needle is again introduced into the middle of the first loop from below and pull from the middle of the second loop, again take two threads and so on.

Sometimes you inadvertently miss one loop. This loop is easy to restore with a knitting hook. In hosiery knitting the skipped loop should be knit in the intended direction, while the reverse is in the opposite direction.