Far beyond the territory of the life of the Mordovian ethnic group traditional costume were known for their wealth. L. N. Molotov, describing embroidery of the Mordovians, highlight its peculiarity and complexity among the traditional embroidery of the peoples of Russia: "Given the nature of the pattern and technique were the Mordovian embroidery – it is more massive, decorative and texture. As rightly noted by the experts, it is inherent corovest. Indeed, vintage womens shirts, almost entirely covered with longitudinal strips of thick, dense embroidery, produce the impression" [2, p. 25]. Embroidery pattern, being a product of and belonging to traditional culture, deeply conservative, not likely to change. The roots of it goes back to archaic times and is the custodian of more mythological ideas about Genesis. 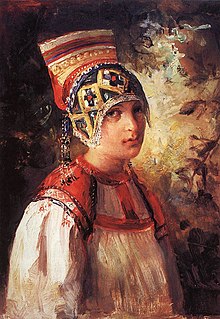 The main element of the folk costume of Mordva is the shirt, which is often served with the top and bottom simultaneously. That shirt was made out of the most rich embroidery, the complexity and technique of its execution was in direct proportion to the skill of a girl or woman, wearer of the suit, which itself made clothes.

With the aim of examining the contemporary state of folk arts and culture, including clothing and embroidery in ethno-cultural processes of the Mordvinians in Central Russia was organized by the ethnographic expedition in Moscow and the Moscow region [4]. The expedition had collected material, allowing to reveal degree of safety traditions, as well as a number of innovations, penetrating into the folk costume of Mordva.

It is important to note that the embroidery in the national clothing of the Mordovians living in Moscow and Moscow region, recorded primarily in the clothes of Amateur: "Barauna", "Kolpinskie voice", "Marlena", "Mastorava", "Testine-Castine", "Erzyan Weigel", "Oh, Mordovochka!", as well as individual representatives of the Mordovian Diaspora. It came from krasnoslobodskaya, Kovylkino, Zubovo-polyanskogo, Atyur, Torbeevskaya, Kadoshkinsky area of the Republic of Mordovia and Orenburg, Penza regions, cities Temnikov and Moscow, each of which had certain characteristics.

A new sphere of functioning of the national garment – stage, large celebrations, events, family and public holidays – contribute to a widespread change of costume. Novelty is the need to more vividly demonstrate ethnic culture, originality of either collective or individual representative that promotes the appearance variability embroidery shirts in traditional clothing of the Mordovians.

Shirt N.P. Fomina made of homespun cloth, her traditional embroidery of the Mordovians-Erza and made in the techniques: "counting surface", "painting" and "set": "Erzya embroidery was characterized by a beautiful carpet texture. Her ornament was pretty simple: diamonds, crosses, broken lines, the scattering of points" [3, p. 36]. Geometric motifs dense embroidery shirt N.P. Fomina are traditional; agreement with the Canon of the materials used for embroidery (wool) and embroidery colors (dark red and dark blue, orange and green as additional). Shirt N.P. St. Thomas with its decorative trim, embroidery should be considered as a component of the complex traditional folk costume.

The next sort of decoration of the shirts is the embroidery, applied to simulate the tradition. The pattern of this type of embroidery repeats predominantly geometric motifs inherent in traditional embroidery, is done as traditional techniques and unconventional and is localized on the shirt in the accepted tradition of the area. This embroidery on shirts clothing E. V. Bukina [6] A. Bukina [7], A. P. Piccinini [8], O. P. Fedina [9], L. P. Shubina [10]. Clothing complex data informants includes: shirt, Panhard or dress – nula, apron – Capone, hat, lapel claret jewelry and beads, pendants waist – kilks, clothes O. P. Fedina [9] enters dorsal decoration – copor tape. Wide sleeve cut from two fabrics of different colors, shirts, E. V., Bukina [6] A. Bukina [7], O. P. Fedina [9], L. P. Shubina [10] decorated bottom with colored ribbons and various ribbon. The sleeves of the shirts of A. P. Piccinini [8] and L. P. Shubina [10] that do not have panels of red fabric, you can see a longitudinal embroidered repeating large flowers floral ornament in the band, made in the traditional technique of "counting surface".

Noteworthy fact is the significant increase in the brightness of the color embroidery of the study group shirts. So, the main remain the traditional red and black colours, additional green and yellow, they are also often used blue, orange and pink.

As a result of careful study of the surviving embroidery on shirts, E. V., Bukina, A. Bukina, A. P. Piccinini, O. P. Fedina, L. P. Shubina, noted the change. This is due to the use of modern materials: weaving fabric factory, for example, shirt E. V. Bukina [6], much thinner self-sewed the weave of the canvas, a modern thread – floss, which are used to perform embroidery enable you to create more subtle and elegant pattern. As noted T. A. Krukova, in the study of folk costume of Mordva-Moksha: "as the material for embroidery, along with wool, currently uses coloured silk and floss. It amends and the General nature of the embroidery. Even if he remains the same, due to the use of a new material becomes smaller, almost jewelry work" [1, p. 89]. In most cases, because of the complexity in the implementation of the traditional embroidery on the account of the threads of the cloth women it is replaced by a more simple dial – shirt O. P. Fedina [9] – and even non-traditional embroidery of "cross" – shirt E. V. Bukina [6] A. Bukina [7]. New embroidery techniques retain the tendency of the simulation of geometric pattern, which is characteristic for the traditional embroidery of the Mordovians.

Embroidery on shirts, T. A. Zaichuk [11], N. D. Softinway [12], E. J. Mishaninoj [13] has common features and its own characteristics. To the General features of the embroidery should be attributed to its location, it is localized: at the bottom of the shirt (the technique of "counting" surface "set", "painting"), on the shoulders (the technique of "counting" waste, "set", "cross"), along the back at the seams connecting the back and side panels, which, according to N. D. Softinway [12], called muwalat (the technique of "painting"). It should be noted that slight decoration of embroidery on the front panels of the shirt (the bottom of the front of the shirt, the neck), is associated with the appearance in the clothing of apron covering the front panel, therefore there is the rejection of the registration of the front cloth.

To the specifics of embroidery shirts T. A. Zaichuk, N. D. Softinway, E. J. Mishaninoj should include a variety of ornaments, composition and techniques of embroidery decorating the sleeves, shoulders, and back of shirts. Embroidery sleeveless shirt EY Mishaninoj [13] is located above the red cloth sewn on the hem of sleeves it is grouped in the form of a strip plot arrangement of flowers, trees and birds, executed in the technique of "cross". Over embroidered roses red and blue flowers, enclosed in a strip, one can observe a spreading tree, the sides of which are birds with outstretched wings. Used for embroidery thread floss bright colors: red and black as the main, blue, pink, green and yellow as an extra.

Embroidery sleeveless shirt N.D. Softinway [12] is original drawing style and technique. Nina D. Cutinova is the bearer and Creator of his suit, including the richly decorated shirt. N. D. Cutinova rasshivat shirt on sleeves bouquets of bright wildflowers – red poppies, fantastic colors: yellow, lilac, orange, pink in the technique of "colored surface". In addition to applying new embroidery techniques, the original ornamental compositions, modern materials and bright color combinations, the skilled worker has a ornament in unusual areas of the shirt to better showcase the brilliance of the embroidery, i.e., the outer side of the sleeve and on the shoulder blades, around the shoulders, which allows dense the embroidery pattern smoothly to "enter" the "space" of white homespun canvas.

The greatest variety of embroidery shirts among study groups different shirt T. A. Zaichuk [11]. Her sleeveless on the red cloth sewn on the cuffs, embroidered "cross-stitch" rows of floral ornament, vase with stylized wildflowers and sides of roosters with fluffy tails. Just above the shoulder wide strip is zigzag with colorful flowers, embroidered "cross." Next to the ornamental strip are strips of lace, ribbon, embroidered stripes and rosettes of geometric ornament made in the technique "counting surface". Richly issued and back of the shirt. Between the longitudinal strips of embroidery cobalmin is cross embroidery "cross." The ornament consists of bands of small ornament, which you can observe the pattern with flowers and leaves, enclosed in a triangle with the vertex down. All embroidery is made with threads of floss in various colors – red, black as the main, dark and light pink, blue, light blue, green, yellow, purple, orange as an extra.

Described embroidery dress T. A. Zaichuk, N. D. Softinway, E. J. Mishaninoj is original and individual solution, new techniques of execution, brightness of color color and include a variety of vibrant and aniline colors. In General, when execution of the embroidery craftsmen focus on simplifying technology, so time-consuming "accounting surface" is replaced by the more simple techniques the "color surface", "set" or "cross".

Therefore, the identified species of ornamental design shirts Mordovians living in Moscow: traditional embroidery, embroidery with the inclusion of a small number of innovations and embroidery, characterized by originality and personality, allow us to conclude that folk embroidery in this region undergoes constant changes, keeping only the ancestral localization at the bottom of the shirts in the form of rosettes and ornamental strips in rosettes on the shoulder and an ornamental row at the sleeves and back. It should be noted the trend of simplifying the execution of the embroidery, as the complex technique of "counting surface" and "painting", adopted in tradition, are replaced by more simple "cross" and "colored" surface. Embroidery pattern in traditional areas of localization, regardless of technique mimics the geometric pattern of traditional embroidery. There are new areas of space fabric of the shirt that are filled with more simple embroidery techniques with individual and specific pattern.

In General, the embroidery of the studied groups of clothes of different brightness of color of color and include a variety of vibrant and in some cases the aniline colors. The dominant colors of embroidery remain bright red and black, complemented by light pink and dark blue, light blue, shades of green, yellow, orange and purple. Traditional embroidery on the shirts, made of materials of home production, is relatively rare in contrast to embroidery shirts, made of modern materials that are common and in which are combined the traditions of Mordovian ethnos, and modern innovation.