Suzane is a large mural on the wall is the main place in the species spectrum of the Samarkand embroidery. For their manufacture was taken white homespun cotton-based, silk or factory coloured fabric.For embroidery threads were used for the silk and cotton handicraft work or factory, sometimes (in detail) wool. As noted by O. Sukhareva, red hair appeared in the embroidery of Samarkand is not earlier than the middle of the XIX century and disappeared in the 1880s that is one of the Dating traits. Interestingly, the study of the embroidery of Uzbekistan started from Samarkand. In the 1930s, O. Sukhareva, senior researcher at the State history Museum (Samarkand), has collected a wealth of material on Samarkand's embroidery, which at present is in the form of a manuscript in the library of the State Museum of arts (Tashkent). On the basis of these materials has published a number of articles. In the future, the Samarkand embroidery is not subjected to special study, but it is considered in all studies of this type of national art.

- rows of large rosettes framed by the foliage of the rings,

The evolution of these drawings, as drawings of any other center embroidery is one of the most fascinating aspects in the study of this art form, which in the end sheds light on their Genesis.

- the middle of XIX century - 1880s - the conservation of archaic traits in ornament and technology.

- 1890-1905 from the transition period associated with changing style and technology;

Inherent style justifiably considered picturesque, naturalistic. The embroidery was done on white background, sometimes on Burgundy, green or violet factory fabrics, colour was based on the combination of different shades of red and green (basic) colors, optional colors: yellow, blue, gray, gray-green, purple-black. Its main motif is a large floral rosette - Lola (Tulip). Embroidery with rows of floral rosettes can be considered a typical example of local style. It often happens that the outlet is executed in red tones, surrounded by leafy rings that had different shades of green, complemented by bright red streaked. G. Chepelivka suggests that these ring - the image of the vine. However, it should be noted that this motif is common in the textile art of the Muslim East is pretty wide, and its connection with the vine has been observed. Direct analogs in the embroidery of the Bukhara school, where round rosette framed by the green foliage of the rings is one of the leading elements of various compositions predominantly medallion, as well as "vasovich" carpets (Vase carpets) Iran (XVI - XVII centuries), the composition of which consist of rows of lush floral palmettes and rosettes, are taken in a circle of thin branches. The prototype of this picture was the spiral is a classic motif of Islamic ornamentation, used as an organizing structure for floral decor in rugs, wall paintings, etc., the Genetic closeness of the mentioned analogy is not in doubt, but in this case some interesting differences in vasovich carpets palmettes and rosettes represent highly developed forms, fine detailing and multi-color solution, the branch is a thin line, on which are strung rare, elongated the shape of the leaves and small flower rosettes.

Bukhara as an analogue, made by folk artisan - cismales, characterized by simplified forms: Palmetta much more modest, and the thin branch a little wider. Shamrocks going across the diameter, sometimes with external and internal parties turn it into an openwork green ring. Even more significant changes in the Samarkand variant, the outlet is becoming larger, and its interpretation becomes a purely local character, Dating back to the motifs of the circle on early medieval terracotta plates of Samarkand.

Palmettes, as elements of a more complex drawing, do not occur at all, is a deciduous ring is becoming heavier. Sometimes the leaves transformirovalsya, turning the ring in some semblance of the toothed Hoop. The Parallels between the Iranian carpets of the XVI - XVII centuries, embroidery of Bukhara and Samarkand, as traced on the example of separate elements and absconsion level, is not accidental. They give grounds to assert that the Genesis of some songs of embroidery dates back to the era of the middle ages, when the floral decoration in the textile art reached its peak. Remember that the designs for carpets and embroideries were designed by professional artists-ornamentality working in a major city or Palace workshops, hence this well-known refinement, refinement of forms. However, the embroidery of Samarkand shows a weaker connection with "Palace" art, professional, elitist artistic tradition of the middle ages, despite the fact that in the past it is the capital of Timurid Empire. The reason for this constant raids of nomads, especially in the eighteenth century, when the "Samarkand was nothing left alive" and the refined traditions of the city, the Palace of culture survived only as echoes in the work of craftsmen. Samarkand embroidery - a fine example of folk art style.

Further evolution of Samarkand drawings is towards greater simplification. The size of embroidery at the turn of XIX - XX centuries increase, the pattern coarsens outlet in some cases reach 1 m in diameter. The number of such outlets could reach 15-20 pieces on one suzanis. These changes led to the enlargement of the seam. Reduced color scheme, green color is replaced by black. Finally, in the third period uses mainly factory-made fabric and yarn, ornaments retain monumental forms, and the elements thicken, the colour becomes graphic and contrasting, small details disappear.

A sharp increase in the size of the embroidery the researchers associated with the "class time" - "using the embroidery of a growing class of trading bourgeoisie sought to show their power, to give proof of his wealth". However, this monumentalization a negative impact on the decor. The desire to enlarge the picture leads to the fact that deciduous ring turns into a wide, winding escape with a firm curls, crowned by trefoils or cinquefoil. It fills all free field of the embroidery, leaving no room for any additional explanation, completely changing its design. In some embroideries this escape is transformed into numerous spirals, which depart directly from the flower, likening it to the vortex outlet. So, as a result of natural transformation of the figure there are new options hardwood rings that appear in 1905, forcing the rest of the drawings and "becoming the most fashionable form of leaf ornament". Relatively thin at first, they gradually thicken, making the ornament massive and depriving him of his dynamism. These were the queries of customers - to make thicker leaf ornament to his needlework was more threads and it would be seen that embroidery belongs to the rich people. In research on embroidery, these motifs are treated as "spiral curls escaping melons" or "the whip bocenago plants (mustache)". It is difficult, however, to agree with the interpretation of these elements as a "reflection of the production activities of women embroiderers of the era of matriarchy, when she was collecting edible plants, and later they were cultivated".

Throughout the twentieth century in Samarkand was less women who remember the craft skills, but the traditions of the Samarkand style preserved provincial Urgut, which currently is a major center of the embroidery. Here is still dominated by the composition established in Samarkand, the beginning of the XX century and brought to its maximum expressiveness is a large scalloped rosette framed by a wide deciduous rings. However, Urgut drawings, compared to Samarkand prototype, a more simple and rough. Stored and concise gamma tri-color Burgundy, crimson rosettes and black leafy ring. However, for all traditions the design Urgut embroidery is a qualitatively new stage in the development of the pattern of foliage round turns into lognormality decorative motif that fills the entire field of embroidery. The result is a white background basis also becomes an important decorative function - it is perceived as a subtle graphic pattern. Creates the effect of a white figure on a black background. This decorative principle - bustanoby pattern or complementarity between pattern and background is typical of the artistic culture of nomadic pastoralists, before the embroidery Samarkand school he never met. The influence of the steppe culture is certainly not by chance - near Prut, the main residents of which Tajiks are numerous Kazakh settlements. In their environment for centuries developed the production of felt carpets, whose technology became the basis for the emergence of background-free patterns. Such influence is nomadic techniques in the art of settled inhabitants is no exception. So, Gurumsaray ceramics is a unique example of the use of traditions bespontovogo pattern in the pottery craft. Her monumental, archaic decor consists of curvilinear ornaments, forming a contrasting white, and blue compositions, which were originally characteristic of the felt carpets of lakisov.

Original Urgut patterns is the final phase in the evolution of one pictorial motif outlet, in leafy setting - from the spiral development of the medieval artists before shoots wide toothed pattern which identifies the role of the background as an important decorative element. As innovations in Urgut embroidery are visual motifs -Ewers. Deciduous ring retains its black color, but the green still appears in some detail in the center of the rosettes, panels and so on. In General, the embroidery of Samarkand and tending to him is a stable, the original school, which could certainly be the subject of further research.

A brief analysis of the drawings of the Samarkand suzani gives you the opportunity to notice that the ornamental baggage of local masters were associated with local traditions of arts and Muslim heritage. Speaking about the décor, the researchers note its archaic character, however, based on the foregoing, this definition needs to be adjusted. Indeed, the archaic elements in a variety of ornaments are present, but scarce the whole repertoire of its stable compositions dates back to the period of the developed middle ages. It was at this time reached its blossoming vegetable and flower style that characterize Islamic art. Assuming some elements of the classical heritage, Samarkand masters have developed their own original artistic language, which is the distinctive features of the Samarkand embroidery. Its main decoration - rastitelnojadnye forms small, it consists of sockets (Lola) leafy shoots, flowering shrubs and items

Chahar-Chirag. But rich creative fantasy allows you to create a limited set of items all new versions of the picture, the nature of which conveys the specific features of the popular style: the Convention and

primitive forms, and their content is related to the idea of fertility, blooming world of nature. Not accidentally, the embroidery had the value of talisman and its main purpose was to use in wedding ceremonies when the bride was most vulnerable and needed the protection afforded by items-amulets. 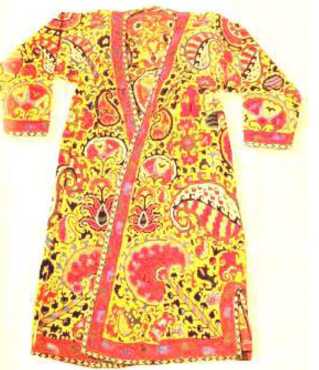 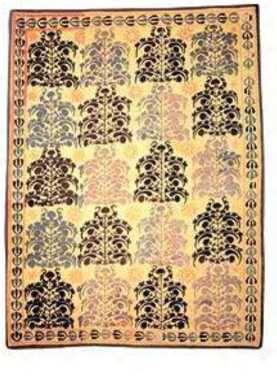 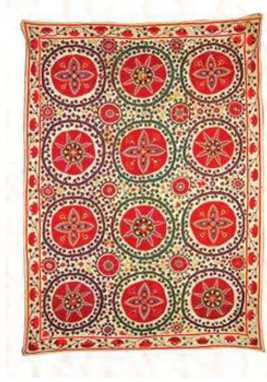