The ornamentation of everyday items of the Russian peasantry have long been associated with performing various rites that accompanied all stages of human life.

The patterns that decorated the utensils and the clothes of the men carried in a specific information.

Great attention was paid to the decoration of textile household items.

Especially richly ornamentals clothes, towels, valances associated with the wedding ceremony, funeral and maternity rituals, and holidays, included in the cycle of agricultural work. Motives of ornaments, until recently, was a traditional, often archaic.

Great sense of composition filled with geometric ornament. Of course, the geometrical ornament is the earliest form of ornamentation. It is not surprising that the semantics of geometric images reflected the sacred representation of our ancestors. We can assume that the latest value of the ornament as a talisman against evil forces was initially just one of its functions.

In mytho-poetic and religious systems common geometric symbols are cross, circle, square, or rhombus. And their images are often combined, flow into each other, are synthesized.

The main idea of a circle and a square – delineation of space internal and external. The cross emphasizes the idea of the centre and main directions coming from the inside out. The cross can serve as a human model, an anthropomorphic deity, as well as geometrizovannym variant of the world tree. The cross may represent, and solar sign – intersecting rays.

In many historical and cultural traditions of the cross symbolizes life and immortality, the active male principle. In most languages the names of the cross belong to the masculine gender.

Often curved ends of the cross clockwise, sometimes they acquire a rounded shape. Consider the swastika as a solar symbol, a sign of light and generosity, indicating a safe, happy object.

The circle expresses the idea of unity, infinity and perfection, highest perfection. The motive is associated with a daily annual movement of the sun, hence the widespread phrase "all year round".

A circle often symbolizes the sun itself, in different types of art depicted in the form of a polygon, a rhombus, a square, associated with the feminine.

The main value of the square in different sources are right, truth, wisdom, honor, land. Square and circle form the horizontal plane for the "world tree". In many cultures painting "model of the world" fit into the square, which gives an indication of the correlation of the square and space. Often a square opposed to a circle.

The derivative of the square – rhombus also seem to have been associated with the symbol of earth and fertility. "Judging by the place in different songs, it could mean the earth, the plant and the woman at the same time" [1, 13].

Cosmic significance cruciform, square, round shapes as pagan symbols revealed many samples of art of the peoples of the world. These pagan solar images inherent in the ornamentation of Russian embroidery.

The archaic stories of Russian folk embroidery, extant in a large number of options that allow us to trace the stability of specific traits, to see them as repetitive, common places.

Thus, we can speak of traditional motifs preserved by generations of masters, partly lost in the minds of people the sense. But in combination with other sources – terminology patterns, folklore, – these motives are available to researchers. Often, in understanding the language of ornament plays a big role, its name, and it, in turn, may derive from the techniques from the material or from the place of origin.

All have names of patterns that are associated with the heavenly spheres: "the moon", "months", "circles", "the sun" (Olonets province); "Zvezdochka" (Novgorod province). Many of the patterns of has acquired a genre character, but originally they did not reflect everyday scenes, and have been associated basically with ancient mythological notions. Features continuously repeated in different versions of the ornamentation of textiles, allow you to believe the designs are not just a figment of the imagination of masters, and deeply traditional.

One of the most common and persistent motifs in embroidery compositions, the round socket. Complex square building with a rosette or star in the center, perhaps basically goes back to the solar symbol, according to its middle position in the tracks where he is surrounded by plants and birds. Large rosette – the sun is placed in the center and as it illuminates the surrounding nature. Graphic symbol of the sun in embroidery was a Phillips socket and a circle with a cross, often radiant. Under the terms of equipment, the circle turned into a star, diamond or even a square. While maintaining its name – "the circle", an example is Novgorod the tune of "circles."

All Russian peasants imagined the sun as a shining circle, a ball of fire floating in the sky. So partially in the geometric symbols reflect the movement in the vortex outlet in the circle with swirls-rays, the cross with curved ends. Many reputable researchers believe that they symbolize the sun [4, 248], and the image of a diamond with four dots inside the symbol of the plowed field [1, 11]. Over time, geometric motifs have lost their original mythological meaning and has become a common decorative element.

The circle, the rosette, the star was able to reflect on community and how other heavenly bodies. The ancient farmer has attached great importance to the phases of the moon, associated with the agricultural cycle. For example, the Olonets pattern "circles" to make sense of how months. The ancient value of the socket over time reinvented, with plant motifs, it is given as a generalized image of a flower. The cross, associated in the compositions of the archaic type with paganism, and later perceived as a symbol of Orthodoxy.

In addition to the Central rosette motif, a circle, a cross, as a symbol of the sun and other heavenly bodies, interesting motive comb rhombus. In different regions it was called differently: "head", "hooks", "trestle", "a rhombus with hooks" or "comb-like diamond" - one of the oldest folk art motifs. Often this motif is associated with researchers as a way of fructifying the earth. Also varies its meaning as a symbol of fertility, the feminine. The terminology most likely related to later interpretations of the pattern. Perhaps in the minds of embroiderers, he was associated with the head, covered with hair, hence the name "head".

The motif of "rake" is interpreted by many scholars as a symbol of plowed, planted fields, but that meant in reality this image, hard to say. The image of the rectangle in embroidery, probably due to an incomplete picture of a rhombus, a square, and can symbolize a geometric variant of the tree of life. 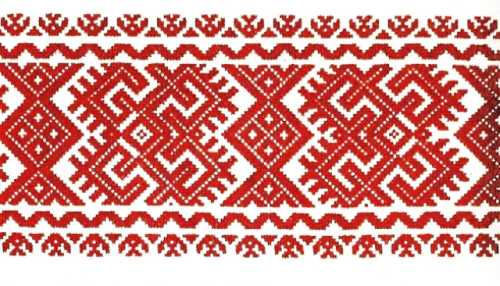 An intermediate position between geometric and figurative ornament is a embroidered patterns composed of motifs Guskov, deer, female figures, sometimes geometrized so that they lose all resemblance to a specific type. Very similar to each other patterns of this type were performed in the technique of patterned weaving, embroidery, cross, white stitching, colour pereview (Kaluga oblast). Strict rhythmicity ornament contributes not only to the same width of the segments, building a highly geometrized shapes, equal angles that intersect its line extending only diagonally, but also that the width of the background colour equal to the width of the elements of the pattern, so that the background becomes ornamental.

The geometrical motif of the female figure – the most common in Russian embroidery, it forms countless options. An example is the zigzag strip is formed from triangles, where inscribed female figures or half-figures up and down the head, which enclose figures of a smaller size.

Sometimes ornamental strip can be replaced by a clearance of the background located in the form of a zigzag. Also the patterns were made mainly in the technique lines-Previti and color of Previti, they are characteristic for the Central regions of Russia, although they occur in the North.

Embroidery of the Russian North, in contrast to exactly the same frieze of figures in the Central and southern regions often have a different shape. Some scientists link these changes with the result of the superimposition of the motif of a woman-goddess and the motive of the tree of life.

The archaic ornaments of the type rightly recognize an outstanding phenomenon of popular art. This is one of the important sources to uncover features of the ancient worldview of their creators. In the ornamentation stood out personified the forces of nature that determined the welfare of the farmer. After the baptism of Rus a cult of the great gods (mythology high) were the least sustainable, however, has not completely disappeared, in particular the echoes of it survived in the ornamentation of the embroidery (the image of the goddess, the image of the world tree).

The images of lower mythology, including geometric symbols, firmly established in the folk art and, despite the fact that gradually lost the consciousness of the population its meaning, live on to this day.

And if the original representation of the ancient hunters, fishers and early farmers were eventually lost, however, the idea of the benevolence of these images was preserved.

In embroidery in geometric motifs are all the forces of nature, all of its elements. Her beauty in poetic form reflected in the Northern lamentations of the bride, where she talks about "sewn-brane" shirt, which she embroidered three nights (Ivanovo, Peter, and Elias) where "vysivani good shoee red sun, the dawn, young midnight bright moon, rivers, all lakes are deep (the Kargopol district, Arkhangelsk province).

The original semantics of complex ancient stories embroidery forgotten population, showed the study of V. V. Stasov, G. S. Maslova and many other researchers of Russian folk art and everyday life [2, 167-169]. To understand the original semantics of these subjects to scientists possible, only relying on a comparative analysis of beliefs, rituals, folklore of the Russian village of XVIII – early XX centuries, as well as a variety of historical evidence and ancient iconographic monuments.

The Russian embroidery ornament peculiar to the unceasing mutability, his motives repeatedly during the long life recycled. The archaic stories of many of the facial embroidery allows us to trace the stability of specific traits, to identify General patterns of the image. In the facial embroidery is the image of the tree, women, riders, surrounded by birds, beasts, represented in a given compositional interpretation. All the parts of complex compositions reflect the subordination of characters, appeal to the Central anthropomorphic, mostly female figure, which stood in a blessing pose.

Thus, a gradual displacement of the rites, the replacement of pagan of Christian values has led to the semantic change. The approval of the G. S. Maslova [2, 168], have reached us only fragments of ancient images. For example, a well preserved composition with idolatory figures in the woodcarving of the early nineteenth century combined with the large figures of the surfactant with which the plot is not linked and are later bringing in the ornament.

The geometric ornament as the most ancient contains inexhaustible material for researchers. From an artistic point of view of its expressiveness and brevity. Unfortunately, many conceptual connections that contribute to the construction of the geometrical ornament, lost. In this regard, the geometric pattern is often used as a decorative finish, while burdened with unnecessary details, the result is a set of random elements.

Only by analyzing ornament from the point of view of its composition, revealing its semantic content that can be achieved from the student folk art embroidery folk awareness of the beauty of the ornament and competent use of geometric motifs in the creative works.

Abstract. In the article semantics of a geometrical ornament of Russian national embroidery is analyzed in the possibilities of its use in creative works of the pupils.