The stitches "Circle" and "Drop". Vergasov

The stitches "Circle" and "Drop". Vergasov

The stitches "Circle" and "Drop"

The technique of these seams are very similar. Draw a simple pencil outline of the pattern. Prometiste it seam "forward needle". In the centre of the pattern cut the fabric into 4 sectors, the "droplet" cutout make a little more than "circle". Fold edge to wrong side and panel pattern stitch "lace" over the edge (Fig. 35A). Remnants of fabric on the wrong side, trim carefully with sharp scissors. The lower part of the seam "drop" run the surface with the flooring (Fig. 35B). 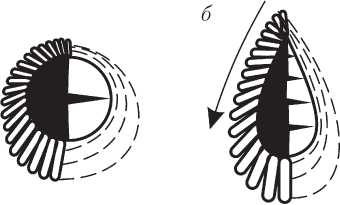 It is also called Vladimir the seam. It runs large stitches starting from the edge of the figure to the center, then back. Attach yarn on the wrong side and pull on the front side in the lower part of the figure. Make a big stitch up, tighten the thread and bring the needle to the front side using 2-3 threads from the place of entrance of the thread through the upper circuit pattern (Fig. 36A). Then run a stitch to the lower circuit pattern, at the same time pulling the needle on the front side next to the end stitch (Fig. 36B). In the result, the stitches on the front side are arranged at a small distance from each other. On the wrong side the seam looks like a series of small stitches along the contour of the pattern.

Stitches around the edges of a pattern feature at a greater distance than in the center. In the colors of the stitches are spread from the edge to the center leaves with a slight slope.