The Picture Of The "Gazebo"

The Picture Of The "Gazebo"

The scheme of the pattern in full size, switch on tracing paper. Using carbon paper, tracing paper and a pencil, transfer the motif on the matting.

All work will be done and a simple satin stitch, vertical gladeville stitch, stalk stitch, knots.

Complete the work a satin stitch. Do the stitches right on the border, highlighting the border between the colors. Put them close to each other.

Start with the largest parts. Embroider stitches vertical tree on the left side of the picture. Crown complete the stitch thread in 2 additions sea green, dark tones of Aqua, greenish-brown thread. A large part of the crown embroider thread color of dark sea waves, with branches made stitches greenish-brown color, separate the other colors.

The tree trunk make brown thread, and small areas of the sky in the crown fill pearl-gray color.

The tree on the right side in the background embroider orange, dark orange, sand, brown tones. Embroider the last color the trunk and branches of a satin stitch. Each vertical stitch of the next row, start in the middle of the previous one.

Between the bushes embroider the gazebo. Pearl grey strands follow its walls, the dome will fill with white color and depth of the gazebo you can select a thread color of dark sea waves. Thread of Navy blue on the dome embroider a few knots. Why fix a thread on the wrong side, and print it there. Keep the needle parallel to the fabric. Around her obvate working thread from left to right. Make the puncture very near the beginning stitch. Move the knots to the tissue and tighten gently pulling the working thread.

Field before the river embroider sand, grayish-green, greenish-brown and brown threads. The high part of the complete bright tones, the lower part darker. All stitches are put vertically.

Lake embroider a Navy blue and pearl-gray from the edges to the center.

The bushes in the foreground do the exact same as on the back, filling the contours of the orange, yellow, dark orange tones. The land should be grayish-green, greenish-brown, mustard and sand.

Last embroider a few stems of cattail stalk seam with brown thread. Put the stitches on the diagonal. Every stitch, start in the middle of the previous one. The smooth embroidery on the reverse side and insert it into the frame (Fig. 74). 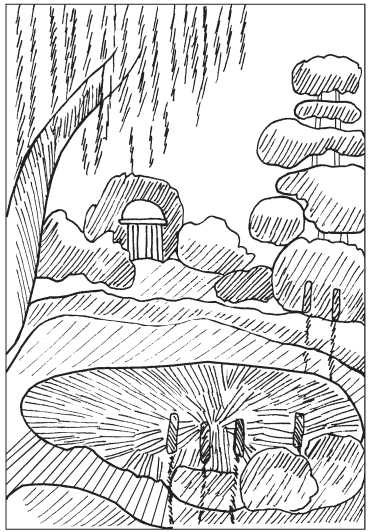 Figure 74. The Picture Of The "Gazebo"