Straight skirt with small pleats sloping (figure 187). These skirts are not recommended from a fabric with stripes or plaid, as oblique tuck down pattern.

Put on a sheet of paper , the base curve of the front skirt (see figure 65) without any Darts. Swipe diagonal lines indicating the middle of the new Darts, the location and number of which is determined by the model (figure 188). To draw the contours of the tucks, align each sloping line to the middle tuck basic patterns, equalizing the points of intersection of the first line tuck with waist (figure 189, see arrow). Put convex lines of the Darts, then starting from the top of the second line of the Darts, draw a line natural waist a smooth curved line.
In the finished tucks should be parallel.
Skirt features Darts in the shape of a fan (figure 190). Put on a sheet of paper, the base curve of the front of a skirt without Darts and draw the first line of the first tuck in accordance with the model (figure 191 ). The numbers indicate the main dimensions. According to the model, mark line, which will be located the ends of the Darts (arc/ arrow). Divide the solution basic tuck into three parts, distributing it in proportion to the lengths of the Darts. If the solution is insufficient tuck, extend the skirt at the waist from the side cut so that tuck respectively become equal to 2,5; 2 and 1.5 cm then draw the Darts as shown in figure 192.
The distance between them must be equal to the waist 3, and ends 6 cm Align both sides of each tuck and check the waistline, as explained in the previous example. Sew Darts rare stitching lines, slightly curved inward tucks to reproduce natural shape. Zautyuzhte them to the side side, strut lines, pin tuck at the top a few hand stitches.
Skirt with soft pleats at the waist. Pseudogene folds create the impression of a certain convexity of the hips (figure 193). These folds of various depths can be directed vertically or obliquely, depending on the shape.
Put on a sheet of paper, the base curve of the front of a skirt without Darts and mark the width of the patterns at the waist without taking into account the Darts (Fig . 194 ). Line with a length of 5-8 cm mark the location and direction of the first fold (see the slanted line with an arrow).
Attach the mold to the figure and lay the crease in the side of the slice. Cleave her at the waist. Mark the second fold and also lay her chips on the waist line. After clarification of the depth and location of the folds move them to the template. To secure the depth of the folds at the waist line when cutting the skirt at the top, leave a wide seam allowance.
Closing the folds, draw a new waist line, then measure it from the middle front to the line side of the slice, and, if necessary, expand on the missing value.
Then remove the pins and put the pattern on a plane, as shown in figure 195. Crosses mark the depth of each fold. Point on check the level of the waist line. Connect the point o to the line of the hips (solid line). Lay folds and starting from the edge of the first fold, again Refine the waistline. 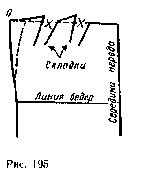