The change in the tilt of Darts

The change in the tilt of Darts

Put on a sheet of paper, the base curve of the front bodice. Tuck mark dashed lines (figure 113). Let's say that a tuck at the waist need to move 2.5 cm to the middle of the front, top and tuck — 3 cm to the armhole. Guide the direction of new lines of Darts (solid lines). 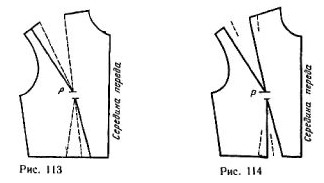 Place this template on the base, carefully aligning the contours. Stick the pencil both layers of paper at point P and rotate the top of the curve so to place a solid line of new Darts on line Darts in the basic patterns. Take the second line of upper tuck.
Remove the completed mold from the base. Close the new tuck and correct the shoulder line, connecting the ends with a straight line. Do the same with the tuck at the waist line. From the slope changes of this tuck elongates her first line and shorter second. Waist line should be corrected on the longer side of the tuck (figure 114).
The clothes are very adjacent silhouette to accentuate a slim waist you should move tuck at the waist, as shown in figure 115. To do this, move the sheet of paper in front of the basic patterns and mark a dashed line a tuck at the waist line. Across the top of the tuck guide the new line of tuck to the waist line (for example 2 cm to the right from the line of Darts in the main drawing). From the waist line will continue to push the Darts down along the line of the tuck Foundation.
Putting the resulting pattern on the base, pierce both patterns with a pencil in the point of intersection of the waist line with the end of the new line of tuck (arrow in figure 116) and turn the top of the curve so that the drawn line tuck is aligned with a similar line of basic patterns. 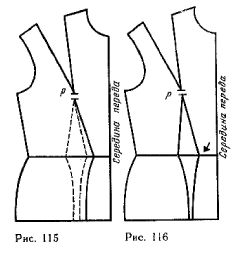 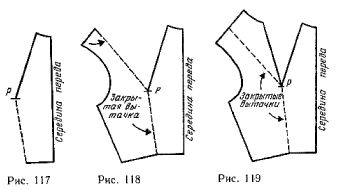