Skirt made of narrow strips extended down

On the same principle it is possible to make patterns for the model shown in figure 215. Group strips are usually placed in the area between the Darts on the basics on both rear and front panels of the skirt. On the pattern the front piece of cloth, draw two parallel lines at a distance of 5 cm from one another and draw two small concave tuck (figure 216).
Draw separate one strip, specify the direction of the grain lines and add each side to the desired height, half the tails of the desired size. Draw a bottom line, as stated above (solid line). The dashed line indicates that olufela can have a quarter size circle. The second strip is drawn exactly the same.
On the back panel of the skirt, the stripes seem wider at the waist than at the hips. This visual distortion caused by the convex shape of the buttocks. Therefore, in order to maintain the appearance of parallel stripes, they need a little sause on the waist line.
Draw two lines at a distance of 5 cm from one another on the curve of the rear cloth skirts, as shown in figure 217. On each line mark the end of the tuck Foundation and build tuck solution, equal to 0.6 cm, This value is sufficient for the normal bulge of the hips. Solution tucks can be specified on the fitting.
Measure on the patterns, decreased as the length of the waist line (in the example, 1-2 cm), subtract this value from the value of the solution tucks the basics and add the rest to the side strip. 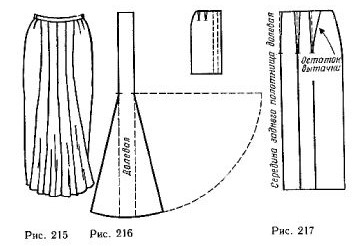