Long tuck fantasies, starting from the point P and ending at 2/s length of skirt (from waist line), creates the fit of a dress with loose skirt (figure 444, 445).

Determine the amount necessary expansion of the skirt at the bottom (same on the front and rear panels). To do this, draw basic patterns before and put it on top tuck in tuck from the side of the slice.
Continue the line side of the slice and tuck fantasies on full length skirts. Then limit the length of the Darts from the waist, putting nadechka, and cut all the surface of this tuck.

Lay the pattern on another sheet of paper and close the top tuck gradually, until the bottom is not formed right recklessne (see figure 445, the dashed lines to nasechek A and b). As a rule, the tuck gives 2/3 of the desired extensions; the remaining 1/3 must be added from the side of the slice. 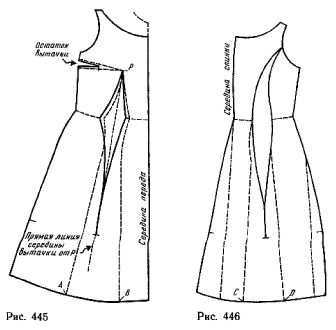 Swipe the contours of the patterns. If tuck from the side of the cut is not closed completely (so it is not shown in figure 444), leave her, shortening in proportion to the magnitude of the solution (see figure 445).
To clarify the line of mid-expansion mark its point on the skirt and starting from this point, draw a line to the point R. draw a new line tuck with the middle of the line (solid lines). Add the missing third side of the extension, a convex line, as shown in figure 445 (nadechka at the end of tuck fantasy).
On the back follow the terrain from the line of openings (see figure 446).
Cut the pattern along the contour lines to the bottom of the skirt, just pull both parts of the patterns, keeping them at the arm openings, to obtain the necessary extensions at the bottom (between nasecki C and D). In this case, the extension will be half of the required width.
Translate the contours of the patterns, as shown by the dashed lines in figure 446, and draw the line tuck in the continuation of the relief (these lines are less convex than the front). The other half of the extension, spread evenly from the side and cut the middle of the back.