Tuck from the line of openings, turning into relief

Tuck from the line of openings, turning into relief

Put on a sheet of paper in front of bodice basic patterns. Close the top tuck, attach the pattern to the figure and mark on it smooth line of the relief from the apex of the chest to the line of openings (see figure 121). 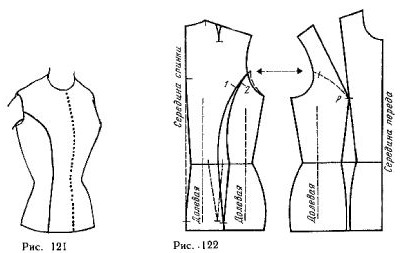 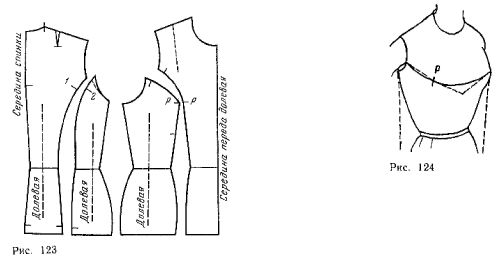 Specify the direction of the grain lines on both parts of the back.
Models with the reliefs from the armhole and shoulder cut are classic, and the relief from the shoulder cut visually lengthens the figure. It can be recommended to full women. For the production of striped fabrics, a cage or with a strong thread of this relief is not appropriate, as the offset of the filaments caused by tuck, more markedly than in the relief sent from the line of openings.
Figure 124 presents two reliefs: the dashed line shows the topography consisting of tuck from the line of openings and Darts from the middle of the front (see figure 98); the solid line shows a rounded elevation passing through the point R. Both terrain gives almost the same view of the model, but in a completely different run.
Put on a sheet of paper in front of bodice basic patterns and draw a line of a rounded relief. Transfer onto a single sheet of paper both common and patterns ( Fig . 125). No matter how you ran the pattern ( by cutting patterns, or by transfer through the transparent paper), both lines of the middle of the front must be on the same line, as in this example.

Figure 126 shows the same rounded elevation model straight silhouette. When comparing figure 125 and 126 show that the line of elevation of the upper part of the same, and the bottom is different, which is caused by the lack of Darts at the waist on one of them.
Figure 127 shows the model with relief, which takes place at some distance from the point P, and therefore cannot translate the upper tuck. In this case, the tuck is better positioned so that it is less distorted external view of the model.
In figure 127, the tuck indicated by the dashed line.
It can also translate into the neck, especially if the model with large collar and wide lapels that can hide the tuck.
Put in front of basic patterns, a dashed line denoting a tuck at the waist ( Fig . 128). Close the top tuck and place the mold on the figure. Draw the first line of relief from the armhole to the waist, following the direction of the Darts on the waist line. The most aesthetic terrain, passing at a distance of not less than 7 - 8 cm from point P (for products of medium size) .
If the model is adjacent silhouette in relief can translate part of the tuck at the waist line. If the model of direct silhouette, enough one line . From the first line of relief, put the value of the solution tucks at the waistline at the side cut (2-3 cm ).
Tuck translated into relief and, therefore, distant from the point P, does not provide a snug fit of the front of the product to the figure, so its not the whole solution was transferred to relief.
At the top of the bodice connect both lines of relief and continue their slightly convex line to the outlet of the openings. Below the waist line Darts in the middle, draw two parallel lines indicating the magnitude of the reduction solution Darts at the hips. Topography lines should touch these lines, as shown in figure 128. If the base curve is not marked is decreasing, i.e. if the tuck on the waist line goes down to the hip line, enough to hold of tuck end straight line down to mark the line of the terrain. On line relief mark nadziejko (with X mark) is the beginning of the upper tuck — and specify the direction of grain lines.
Translate this pattern into another sheet of paper, translating the upper dart in the indicated direction (Fig . 129). In case of unequal convexity of contour lines the distance from nasechek to the waist line will also vary, so you should reduce the first line of relief by increasing the solution top Darts (see the dashed line in figure 129). Close the tuck and correct the curvature of contour lines.