Skirt with back pleat

Skirt with back pleat

Parallel to the line of the middle of the rear cloth skirts (figure 75) draw a straight line indicating the depth of folds is equal to 8-10 cm For one-sided folds, only one depth ( line AB ), for the counter-pleats need to double this depth ( line CD) , 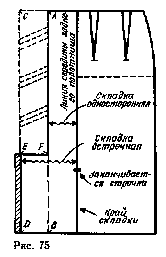 If you want to make the fold not too long (so she hesitated while sitting ), the beginning of it can be calculated in the following way: sit on a chair and mark on the skirt, place the edges of the chair. Line length pleats set at 1-3 cm above, but no more.
If the fabric is very thick, the upper part of the seam allowance on the fold can be cut (see figure 75 square ACEF ). Line EF is located a few inches above the top of the crease. Cut the part patterns for the lines EF and FA ; the same need and on the fabric, leaving at this point in the seam.
Regardless of the type of pleat for ease of line patterns, indicating the overall depth of the pleats, a fold of fabric. If this is not possible, there should be a seam (see the shaded portion from point E to point D ). Unilateral crease usually lay from right to left.
For a skirt with inverted pleat put the resulting template on two sheets of paper. Take one of the translated patterns and put it on a new sheet of paper. Fasten the leaves with pins, placing them outside the lines patterns. Flip the leaves and move a pencil on a new sheet whatever is on the ground (except hatch).
Sew both pieces of paper through the middle of the rear cloth of the skirt from the waist line to the point where the end of the crease. Cut along both of the sheet of paper, leaving the seam, see: on the side of cut — 2-3, waist — 1.5 ACC bottom —6-8, ED — 1-2. Disconnect the patterns of the cloth skirts, arranging them evenly on the table, and fold the crease along the seam ; mark both edges of the folds to the bottom . Again fold both the patterns of the cloth, and connect them via lines ED . Then separate the pieces and fold the paper along the line EB, the opening of the last seam. Fasten the lower part of the folds (line EF ) with thread or glue.
For the skirt with one-second fold, take the translated pattern and also connect it with a clean sheet of paper. Cut out paper, leaving a one-way pleat and seam, as mentioned above, join the parts along the line AB. Then extend the two patterns of the skirt, fold the pleat to one side and priutyuzhte. Determine the required length of the folds and attach it to the template.
Compare both skirts in places buckles (middle rear cloth) and you will see that the handle of the zipper on the skirt with inverted pleat much easier than on the skirt with one-way pleat.