Making clothes by the standards

For a tailor-made layout using dense harsh cotton fabric.
Put on a sheet of paper underlying the corresponding pattern produced on a mannequin or a specific shape. Mark the waist line and hips. Swipe to the breast line of the front and backrest width.
Mark the ends of Darts and the width of the neck backless (figure 16). 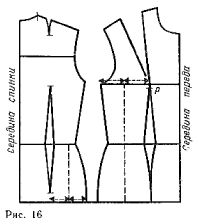 Draw two additional vertical (dashed): the front — midway between the point p and the line side of the slice from the breast line to the hip line; back — in-the-middle between the end tuck at the waist line and the line side of the slice from the hip line to the waist line. Cut out both parts of the patterns.
To correctly position them on the fabric, you need to consider the direction of grain lines indicated on each part of the patterns. So, the line of mid front and back on a basic pattern coincide with the direction of grain lines. The edge of the fabric indicates the direction of the common thread (basics). Filament, perpendicular to the edge, are called weft threads. The diagonal of a square whose sides are formed by warp and weft, indicates an oblique direction yarns of the fabric.
Place the patterns on the fabric, folded in half, as follows. The middle of the front place on fold of fabric and the middle of the back is parallel to the edge, retreating from her at 2-3, see Pin detail pins, trace the outlines with chalk, leaving a margin for the seams, cm: at the mouth of -1.5; in shoulder cut - 3; armhole -2; in the upper part of the front – 5 - 6, dorsum of 3-4; lateral slices 2 and 3; below the hip line – 5 - 6.
Cut the fabric along the chalk lines. Translate the contours of the patterns of the line Darts and nasechek on the second layer of fabric. Lay the front of the layout on the table and slide the chalk line the middle front along the fold of the fabric. When smachivanie layout secure areas subjected to stretching edge.
To facilitate smachivaniya Darts cleave their pre-pins. For smachivaniya tucks use a sturdy cotton thread, securing the ends well, as the seams apart at the slightest movement. Baste the shoulder and side sections, leaving the middle of the back nesmetano. For the neckline and armhole make the notch.
The main goal of the fit of individual model — identifying the causes of the bad fit on the figure.
Individual basic pattern, made by carefully withdrawn standards, should cover a shape without any folds, and at the same time should not hamper the movements ( assuming that the measured figure is not deviations from a normal build). If a shape has significant deviations from normal build, which is quite common, it is necessary to amend the underlying templates. This will allow you to tailor the clothes free of defects.
To facilitate the operation when performing the fitting himself move the closure in a line mid-front.