In this lesson begins the introduction to the technique is the most difficult at the initial stage of learning to crochet period - the first loops; the air loop.
To consolidate and exercises are performed first loops are cut and used to create the application.

Material. Album sheet for the basics of an application; the image of the cheerful gnomes; travel map, a circle with an image of droplets-dozhdinki; card-scheme with a picture and sample of the first air loop; threads of blue and cyan color, hooks, glue, a sheet of paper.

Preparation for work. Watch for the weather (wind, clouds, rain...), talk about the weather phenomena, consider the illustration, depicting clouds, clouds. Ask the children to draw on the album sheet a clearing sky and a cloud. 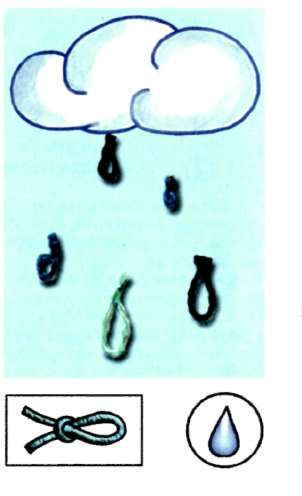 Tell the children that the Jolly old elf living in a Magical land of Knitting, I invite you to continue the journey and stay on the flower meadow where they grow flowers, but now it is very hot, the drought, and in the flower meadow there is not a single flower, as the clouds, hurrying to the Magical land
from a distance, so long before it got that on the way spent all your droplets of dozhdinki. To help this trouble can only children, if you learn how to crochet loops.

Ask the children:
• Review of the card scheme with the symbol and example of an air loop, note that each loop consists of droplets, of the knot and two ends of the strings.
• Draw loops-droplets on a separate sheet of paper.
• Closely watch and listen to the explanation of the first air loop:
to put the thread on the index finger of his left hand, a hook to grab the string a bit to pull it up and twist it together with the thread through the right side so that the thread is tangled. Holding the thumb of his left hand twisted thread and keeping her off the hook, once again capture the thread lying on the index finger, and pull it through the twisted loop. The loop is easily tightened.
• Made to cut the loop a little below the torque (burl) so that there is a short tip strings.
• Tie some more loops.
• Glue the crocheted loops to the paper under a cloud as dozhdinki.

In the analysis of the gnomes thank the children for their work. The travel card is glued logo: circle with the image a bit.