On lesson, children practice knitting in the round parts with loops, a column without nakida, stitching detail seam "over the edge"

Character and tales "Kolobok" (the grandparents), cut from cardboard; master of the Hook; diagram knitting circle; I yellow yarn; material for stuffing; buttons for eyes and nose; hook, needle with large eye.

Came to visit an old acquaintance of children master the Hook, which was found in their Magical land of Knitting with the heroes of fairy tales. After guessing the riddles, children learn to name the heroes of the tale.

He sleeps in the den in winter
under the big pine.
And when spring will come,
wakes from sleep.
(Bear)

Sour cream Mechain,
on the window storen.
Round the side,
rosy side.
Rolled... (bun).

Please note that I include you in all the characters, except for the bun. Advise to tie a bun made of yarn. 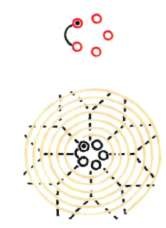 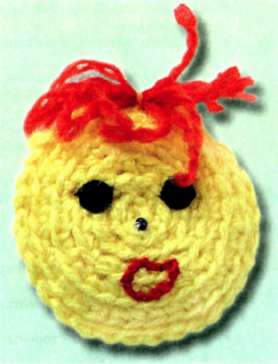 Ask the children:
• To consider the scheme of knitting one part of the bun:
• what are the associated detail loops (air and columns without nakida);
• how often vymazyvaja two columns from the same loops (one loop).
• Connect the 2 round parts. If the bone is thin and the edge of the circle halves of the part will start to bend a wave, then one round knit across the row without a raise loops. The size of the parts is arbitrary, but both are equal.
• Stitch details, seam "over the edge".
• Fill the toy with stuffing material for.
• Sew small parts (eyes, nose), embroider mouth.

In the analysis to select the most carefully made bun and use it during the staging of a fairy tale.

Note: figures of heroes of fairy tales carved out of cardboard, you can add knitted items (the round parts for the head and torso), chain (trim figurines), loops (tail of a Fox, tail, and breast of the rabbit.).