In this lesson, children specify the names of the fingers on a hand, and learning how to hold the hook in hand, to hook the thread hook. 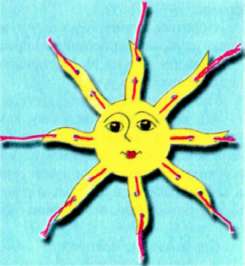 Material. The model of the sun, cut out of cardboard (in the rays of the sun made holes with a hole punch, the wrong side in the center of the sun strengthened beam yellow wool); hook, the table depicting the position of thread and hook in hand during knitting; map of journey in a Magical land and a circle depicting the sun.

Preparation for work. Treat your children to playing with fingers. Specify the names of the fingers:

Look at the fingers,

the pinky Next to him
the finger without a name,

The index finger.
And last my finger -

Remember with children, where in a Magical land for the first time stopped rolling from my grandmother-needlewomen a Ball of yarn.
Please note that the map on the next stop of the ball drawn sun.
Say that at this stop you need to learn how to hold the hook in your hand. 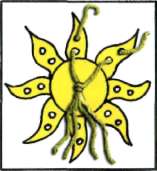 In the analysis of the admire, what a beautiful furry sweetheart, with threads on the rays turned out.