Utilitarian products form an entire movement in the straw. The precursors of the utilitarian straw products have many peoples of the world from prehistoric times was the product woven from grasses, reeds, twigs. With the development of agriculture and the beginning of the cultivation of cereals straw superseding all other herbaceous materials, becoming the main material along with twigs of shrubs used for making baskets, various containers for storing food and clothes and hats and many other products.
Modern craftsmen produce a wide range of a variety of utilitarian items. In our home, they in addition to their utilitarian function are more and decorative, often becomes the main. Straw boxes, sweets bowls, baskets, hats, made by masters of Belarus, it is rather a relic preserved a unique tradition of our land.

Napkin, diameter 16 cm
Materials:
64 straw ribbon with a width of 10 mm and a length of 20 cm;
50-60 long Solomin from the middle part of the stem with a diameter of 3 mm;
1 sheet of thick paper 20x20 cm;
PVA glue, needle, thread number 10 or thread, scissors.
Equipment:
simple interlacing "checkerboard" ;
flat braid "catfish" .
Execution of the work.
1. Getting started with the preparation of 64 straw ribbons. Straw ribbon split into 2 parts, with 32 strips each. Weave of each part of the simple interlacing "checkerboard" straw layers (you get two layers measuring approximately 16x16 cm).
2. Grease one side of a sheet of paper over the entire surface with white glue. Glue one of the straw layers, the reverse side on a sheet of paper. Then apply the adhesive sheet on the other side and glue the second straw layer. Pasted on paper layers will serve as a basis for future wipes. Put the Foundation in a press and allow it to dry.
3. Of prepared for the bundle of straw weave flat twist "catfish" length 120 cm nastavlenie Cut all of the straw and press the braid.
4. Of heavy paper, cut round the stencil with a diameter of 16 cm stencil cut out from the dried bases of the circle.
5. Wet straw tape cut in half. From the ribbon, follow these Kant napkins from two sides of the cut out layer. Sew the first strip to do this, put it on the seam to 2/3 the width of the tape was on the reservoir, and 1/3 were for the region (figure 5.89). First, tape the pin on the perimeter of the bases of the pins, then sew.

The way of sewing. For sewing you can take the thread of light colors or the line. Pass the thread into the needle, make one of the ends of the thread a knot. Injections with a needle do in the middle part of the straw ribbon, in places of an interlacing of straws without destroying their integrity. Hide the knot under a thatched tape from the base. Stitches along the route weaves under straws "catfish" so that the thread is hiding under the netting (figure 5.89 b). On the reverse side of the seam put the stitches along the edge at the distance of 5-7 mm.
After the tape is sewn around the perimeter, neatly sew the ends. The ends of the tape ssuite overlap, the value of which is 1.5—2 cm Make 5-6 stitches, firmly connecting the ends, and securing the trimmed straw so as not to break the pattern of the weave. Stitches try as best as possible to disguise. Secure the thread inside the weaving and cut it off.
6. Tab second straw tape on the back side of the straw layer. The protruding edges of the first and second strips should be the same. The joints of the second ends of the straw strips, place in another part of the edge of the foundations so that they do not coincide with the joints of the ends of the first tape. A way of sewing the second strip similar to that described above. Slight complication is that the injections the needle should be directed between the straws in one ribbon weave Solomin other tapes. The stitches should be masked with one and the other side of Kant.
Once you gently close up the ends of the second strip, dry cloth under the pressure, and it will be completely ready.
With experience you can try to sew straw tape edging on two sides at the same time, pre-pinned their pins to the base.
You can run a set of napkins for the table, making them different sizes. Ways to change the appearance of such a simple product like tissue paper, very much to change the shape of the bases, to use weaves colored straw and tape the straw to change the types of weaves.
The production of wipes will prepare you for the manufacture of more complicated articles of straw. Methods of bonding layers to the substrate, stitching flat braided, fixing and sealing of the ends of the flat braids are repeated and increasingly to improve your other products.
Plate (diameter 20 cm). Consider the sequence of manufacture of the bins on the basis of more complex construction napkins.
Materials:
100 straw tape width of 8 mm and a length of 22 cm.
30-40 long Solomin from the middle part of the stem with a diameter of 3 mm;
60-80 long Solomin from the upper part of the stem with a diameter of 1.5— 2 mm;
1 sheet of thick paper or cardboard 25x25 cm;
PVA glue, needle, thread # 40 or fishing line, soft wire with a diameter of 1-3 mm, scissors, wire cutters.
Equipment:
plain weave ", Parkett" ;
flat braid "catfish" ;
twisted braid of 5 Solomin on the wire frame .
Execution of work: 1. Start with a prepare straw ribbons. Straw ribbon split into 2 parts, 50 strips
each. Weave each piece from a simple melody", Parkett" straw layers, you get two layers measuring approximately 20 x 20 cm.
2. Stick, as in the previous example, the straw layers on a sheet of heavy paper or cardboard. Put under a press to dry.
3. Of prepared to work a straw from the middle parts of the stem straw weave flat tape "catfish" with a length of about 70 cm nastavlenie Cut all of the straw and press the braid.
4. From prepared to face the sticks of the upper parts of the stalk weave the two twisted braids of 5 straws with a length of 70 cm and a diameter of 2 cm, with a wire frame inside the weave. For thickening of the frame, use rough strips that impose around the wire.
5. Of heavy paper, cut round the stencil with a diameter of 20 cm stencil cut out from the dried bases of the circle.
6. Of moist straw tape "catfish" run the piping on the bottom of the bins, carefully sew it to the edge of the cut straw of the reservoir (the technique of sewing, see the previous example).
7. Straw plaits are made of a wall of bins. Wiring work should be dry. Put a tourniquet around the perimeter of the bottom raw side. That straw broke at the bends, tuck up your braid, don't give her much to stretch. The edge of the bases should be closed plait. Laying out the wiring, fix it based on the pins. Trim the excess part of the twisted cable scissors, wire snack cutter. Try not to crush the coils of braids. Both ends of the twisted braids connect at the butt so to match the angles 1 and 1, 2 and 2, 3 and 3, 4 and 4 (figure 5.90). The coils from one end of the netting coincides with the coils on the other end. Visually, this network will not be perceived as a cut, the pattern of turns will remain solid. The ends of the braids connect the pins. In the dry twisted sennit straw is stored in the netting, not replicas, this is a very easy stitching and sealing ends.

8. Sew the twisted braid to the base of the bins. The knot securing the string inside of the hide netting. Twisted braid sew in frame, skipping the needle and thread together between straw turns first one side of the frame, then on the other. On the reverse side of the bottom stitches hide under a woven straw belt. After all straw the cord is sewn to the base, sew the ends, simultaneously fastening them together and attaching to the base. Hide the stitches in the weave of the harness. The connection with the inner sides can be slightly miss the mark glue PVA. Most important when knitting ends is the preservation of the integrity of the picture of twisted braids, and gently and firmly connected.
9. For the second tier side made need to sew a second ring of twisted braids, which run from the second workpiece. The second twist position so that the joints of the upper and lower tiers are not located one above the other, and were in different parts of the circle. Braids first, seal with pins, then sew with each other the frames. Hide the stitches between the loops of the weaving (figure 5.90 b).
10. The ends of the netting to gently sew back to back, combining a twisted pattern.
You can perform different types of bread bins, confetis, changing the shape of the bottom, making it oval, rectangular, rhombic. Try to perform the twisted weaving of different numbers of straws and combine them. Between the twisted tangles insert a chain of diamonds, and your bread will look very different.
Box. 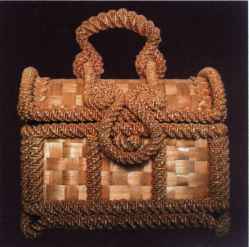 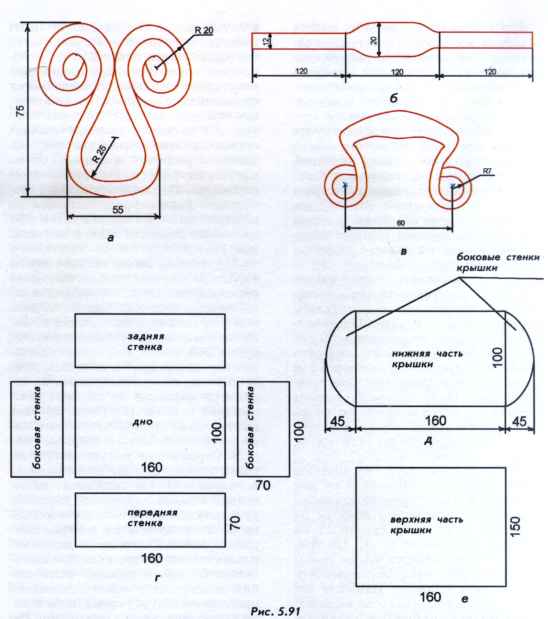 10. At the bottom front of the cover for dividing the strips fasten the prepared upper part of the castle. Adjust the position of the lock, put the cover on the housing box, the upper part of the castle should be easy to dress for the lower part.
11. The box cover sew to the body for a long Kant of twisted braids. Make the stitches loose so the cover can be opened easily.
Note. Making the box, check the real dimensions of the parts that you get.
Using the technology of the manufacture of this box, it is possible to develop and produce a variety of shapes of boxes, trunks, chests, combining them with other types of nettings, making the insertion made in the techniques of geometric and curvilinear applications.