All women's clothes fasten at the front from right to left, back — left to right. Buttons sew through the middle of the front on the left side of the garment. Front buttons must have the length equal to the thickness of the bead.
The beginning of the loop, i.e., the angle which should be the button position accurately on the line of mid front on the right side. When clothes buttoned, both lines of the middle of the front overlap with one another.
To construct the fastener, first determine the size of the button. Then mark the location of the buttons at equal distance from each other and guide a small horizontal line intersecting with the line of mid front (figure 141). 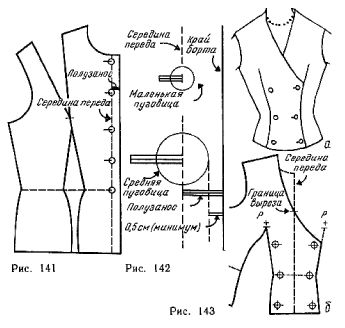