Mesh is the most common, which has become almost traditional, the design and decorative household goods: surfaces of trunks, boxes, trays. Womens rhythmic patterns with repeating motifs, usually completely cover the surface of the products openwork patterns.
Meshes are the basis for constructing rapporti ornaments with a recurring motif. The base mesh of the decor originates from remesnik patterned folk fabrics. Repeat to create the pattern (as in textiles or any other material) must meet certain geometric requirements. The shapes of the rapport must be of the same form, and, moreover, such that it filled the decorated surface completely, without gaps, and at the same time, the repetition does not overlap the neighboring rapport.
The pattern repeat must be placed entirely inside the chosen shape of the surface, not going beyond it.
The possibility of different shapes of rapport is not as great as it might seem at first glance. From geometry it is known that the same figures, completely, without gaps, fill the plane, or may be quadrilaterals of different types, or triangles. From here we can identify five types of "nets", each cell of which represents the shape of the rapport. Cells, or rapport, might have the form: 1) square 2) rectangle 3) parallelogram 4) rhombus 5) an equilateral triangle. The rapport can be repeated in all directions indefinitely by simply transferring, i.e. repeating it next, right and left, top and bottom, or by a mirror repeat in all directions, assuming the mirror plane coinciding with the lines of the outlines of rapport.
Examples rapporti ornaments, built in different types of grids given below.
In a rectangular grid (figure 4.49) an ornamental design (rapport) fits within a rectangular grid cell (square or rectangle).
The elements of rapport can be along the lines of the grid cell (figure 4.50 d) or forming rosettes, to be inscribed in a rectangle of cells (figure 4.50 d). The ornament in these meshes looks static, maintains strict rectangular grid.
Similarly constructed patterns in rhombic (figure 4.52, 4.53) and triangular (figure 4.54, 4.55) grids.
Let us consider some examples of the patterns in the grids.
Ornament in a rectangular grid (figure 4.49 and 4.50). 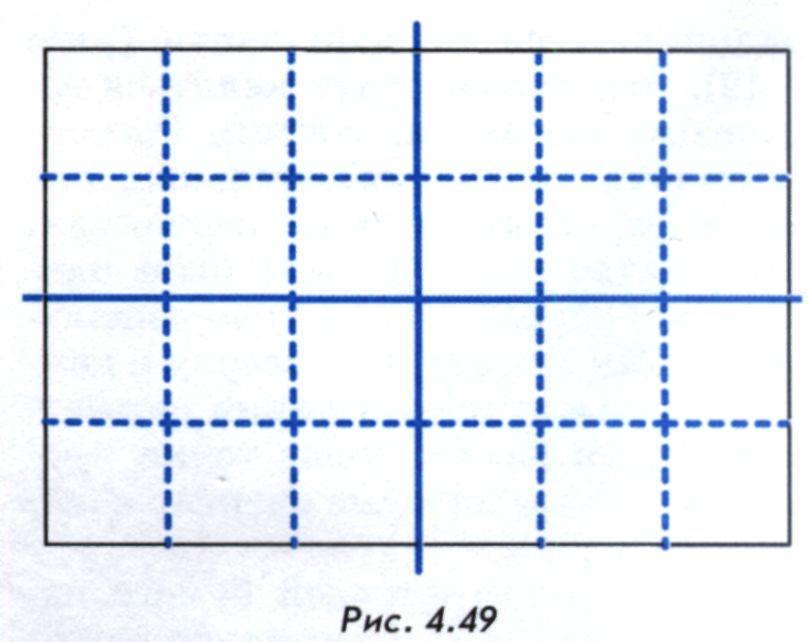 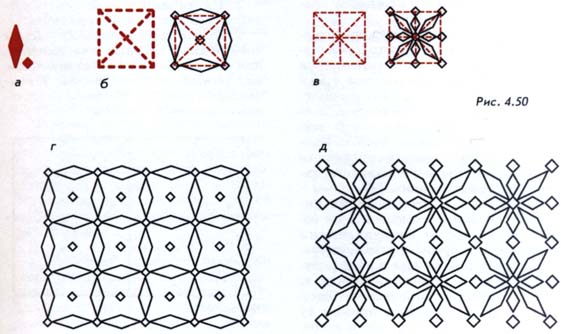 Execution of the work.
1. Performed the layout of the plane. Spend two mutually perpendicular lines which divide the plane vertically and horizontally into equal parts (figure 4.49). These lines will be the main axes of symmetry. Calculate the number of rectangular cells horizontally and vertically. The number of cells must be the same on the right and left of the vertical line of symmetry above and below a horizontal line of symmetry. Using the marked point draw lines that will delineate the grid cells.
2. On graph paper, draw a element of the ornament (rapport), which will fill one grid cell, and repeat across the surface. Figure 4.50 b shows an example arrangement of the main elements along grid lines, figure 4.50 b — sample locations in a rectangular cell of rapport in the outlet.
3. Prepare straw tape required sizes to complete rhombuses and squares (figure 4.50 a).
4. For exercise, you can perform one of two ornaments or both example, you can try to develop your own version of rapport. The ornament of one cell is repeated across the plane parallel transition.
Technology have executed the ornaments in a rectangular grid similar to the technology performance of simple chains. Figure 4.50 g elements (rhombus and square) are arranged along lines, consistently covering the entire plane. During operation, stick to one of the directions of lines such as vertical, then horizontal.
The ornament shown in figure 4.50 d, more complex: it is formed of two directions of lines as in the previous example, but four and includes in its figure the three kinds of elements: square, large and small rhombuses. However, its implementation will take the same sequence as in the previous example. Run the chain along the lines first in one direction, then the chain consisting of the same elements in the other direction. Turning to the second pair of chains arranged obliquely, note that the chains include a new element — a large diamond. Run the first chain in one direction, then in another.
Ornament in a rhombic grid (figure 4.52). The grid pattern will accentuate the intersecting thin straw strips of width 2 mm. In cells located four sockets. 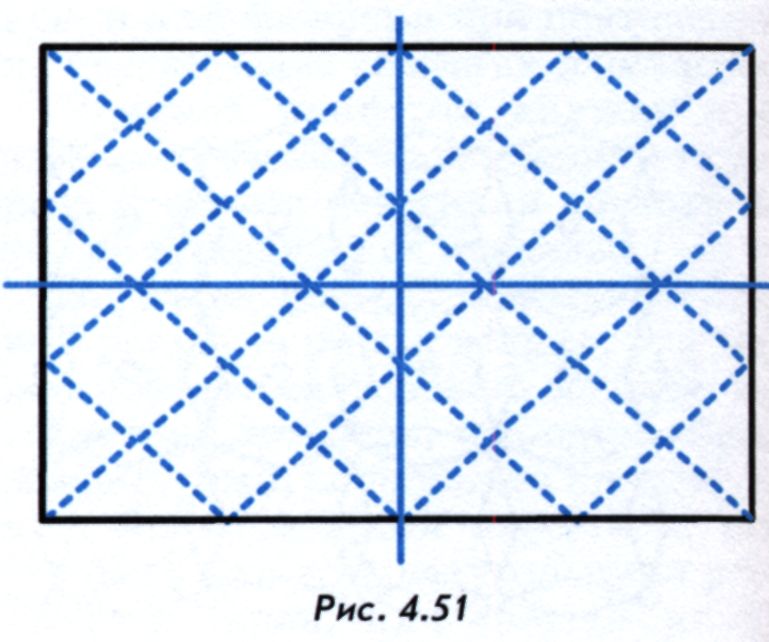 Execution of the work.
1. As in the previous example, starting work on decorating the plane, make its markup. Define the vertical and horizontal axis of symmetry (figure 4.51). Make a calculation of the cells of the ornament to the right and left, top and bottom from the axis of symmetry. Vertical and horizontal lines, which pass through the middle of each cell, determine the position of the sockets in the cells (figure 4.52 b).
2. On graph paper make a sketch of repeat ornament.
Prepare straw strip of the required width to complete the grid, the petals of the rosettes small rhombs, which are included in the composition of the rosettes. The dimensions of the ribbons coordinate with the sketch.
4. To perform the ornament start with a rhombic grid. A thin continuous strip of straw ribbon run along grid lines in one direction, e.g. from left to right. Then along the lines of the second direction — from right to left. The intersection lines and corner joints complete as it was shown in figure 4.34 a and b. dB article Curbs.
5. In the grid cells follow the electrical outlet. The composition of sockets you can create one yourself or use one that is shown in the figure.
Ornament in the triangular grid (figure 4.54 g, d). Ornaments in triangular meshes are formed either parallel transfer of rapport (figure 4.54 g) or specular reflection (figure 4.54 d). 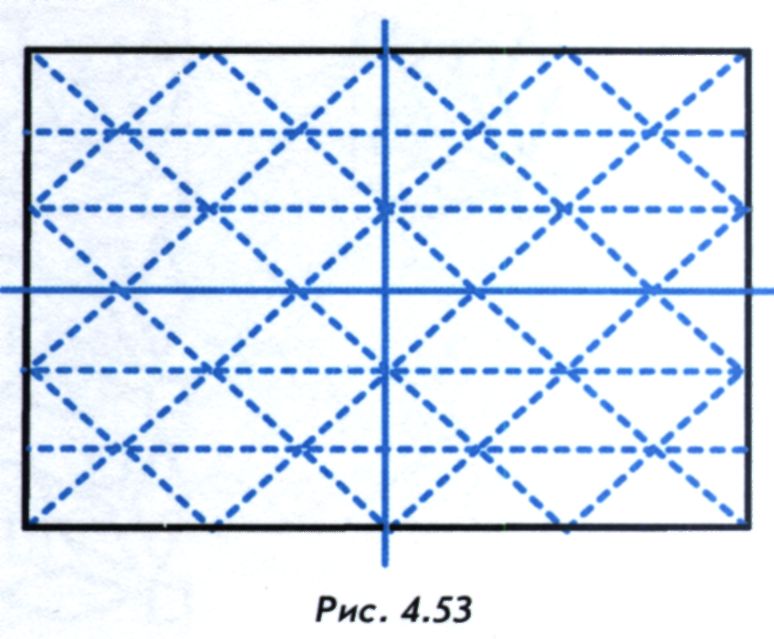 2. In order with repeats of the ornament was easier to work on the plane, complete triangular cell arrangements in small areas triangular shaped right and left of the basic unit (figure 4.54).
If you repeat the rapport parallel transfer of the pattern from one grid to another, you get the ornament shown in figure 4.54 g Try to turn the rapport developed by the mirror relative to the previous provisions. You will get a different version of the ornament, the image of which is shown in figure 4.54. d.
If rapport is built in a rectangular or oval cell, has no axis of symmetry within the composition, a mirror, and parallel shifts will give a different compositional solutions of the ornament (figure 4.55 a). 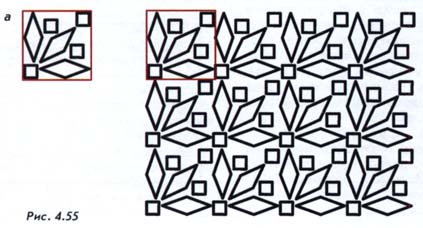 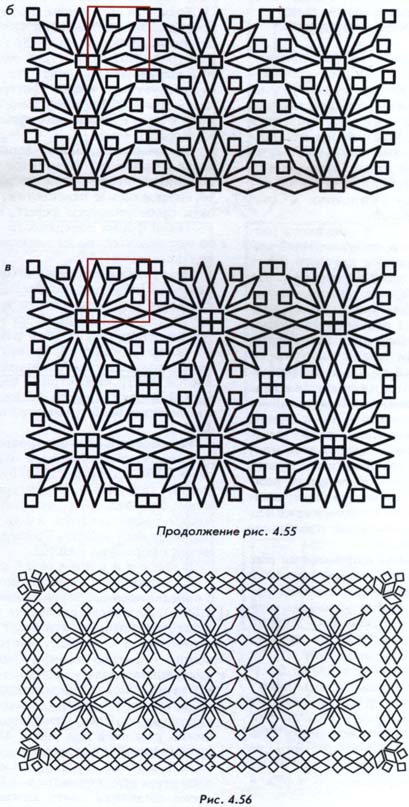 In the example, based on the rapport built in the rectangular cell, are shown three options for ornamental compositions. Figure 4.55 and ornament obtained by transfer of the rapport parallel to itself across the plane. In figure 4.55 b, the ornament you received when transferring rapport mirror about a vertical axis of symmetry. Figure 4.55 in the pattern obtained when transferring rapport mirror about vertical and horizontal axes.
When making reportnum ornament planes of trunks, boxes box ornament, usually made according to the principle of carpet compositions, limiting it to the perimeter of the ornamental strips in the form of chains or curbs (figure 4.56). In the compositions of the fringe bands use the same elements as the composition of rapport.
The width of the ornamental strip is set in proportion to the plane size. Distance from the field boundary of the ornament to the band is determined by the size of the background colour in a rapport.