Axial ornaments. Composition, built on the principle of carpet ornaments, along with reportnum can have a symmetrical construction. The drawing in them is organized on the principle of symmetry about one or two axes of symmetry. In the carpet ornaments often present a combination of several types of symmetry, axial and Central.
Figure 4.57 and was given the partitioning of the plane under the carpet ornament, the composition of which will be based on the axes of symmetry. On the plane on the perimeter determined the place and size of rim. The Central field is the main ornament.
Options different compositional plane are shown in figure 4.57 b—D. figure 4.57 b the composition is built in the Central part of the field. Its contours may vary depending on the shape of the field itself. If the plane has the shape of an elongated rectangle, of the composition it is better to give the shape of an elongated rhombus, or oval. The square shape of the field better support composition, delineated by a circle or an equilateral rhombus. 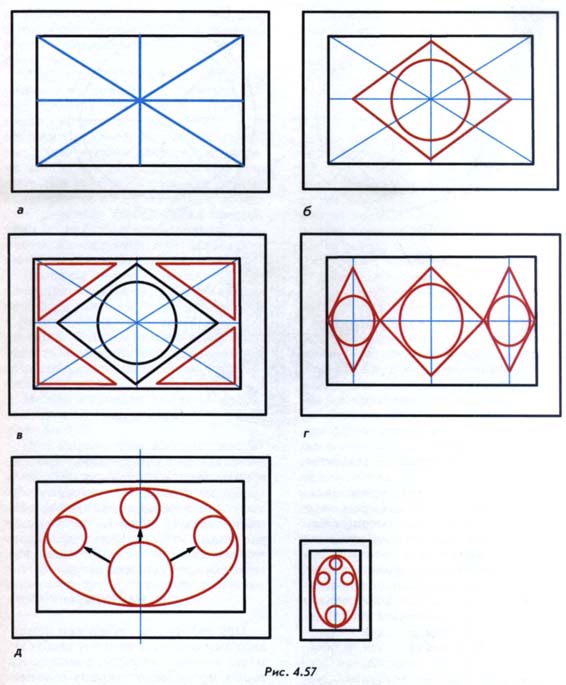 Figure 4.57 in the scheme of the composition, considered in the previous example, which is complemented by a small angular elements. Figure 4.57 g scheme of the composition is built along the horizontal axis. It includes a Central element with two side. These schemes can serve as a basis for making compositions which have two axes of symmetry. Such compositions are equally perceived by the audience from all sides, they usually do not have clearly defined top and bottom.
Carpet designs can contain in its core composition having one axis of symmetry (figure 4.57 d). Such compositions have a pronounced orientation, they have a top and bottom. The Central part can not only be made in the form of abstract ornament, but to have a theme.
All the above examples the development of ornaments and compositions based on them, belonged to the planes, having a rectangular shape. The rectangular shape of the surface is a common, but not the only kind of surfaces.
Centrally symmetric ornaments. Boxes, trays, plates may have a plane shape of a circle or oval. One of the options and decor may be a centrally symmetric ornaments. The basis for the creation of this ornament is the center of symmetry, through which can pass an infinite number of axes of symmetry (figure 4.58 a).
Consider the example of the development of ornament, a limited circumference and having a Central symmetry (figure 4.58). The structure of the radial ornament. Its main elements are along the lines of the radii of the circle. Border ornament decorated border. 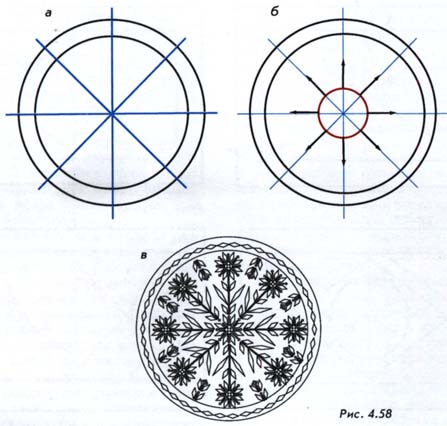 Execution of the work.
1. The layout of the plane start with a sizing border (figure 4.58 a). To do this, draw two circles that will limit the size of the ornament and determine the location and size of rim. Free Central field is the place where will be located the main composition. Define the eight directions on the circumference. Swipe radial lines at an angle of 45° between neighboring lines.
Mark the layout of the elements of the ornament (figure 4.58 b). In the scheme, highlight the center of the composition as the location of one of its main elements and the end of each of the rays originating in the center.
3. The main ornaments are rosettes, resembling flowers in bloom, and radially extending decorative elements in the form of stylized shoots and leaves (figure 4.58).
4. Border songs will be performed in the form of a simple chain based on the diamond — main element of the composition
Add comment