Sockets can be included in compositions of complex patterns. Examples of borders, compositions which include the socket shown in figure 4.44 a—d. 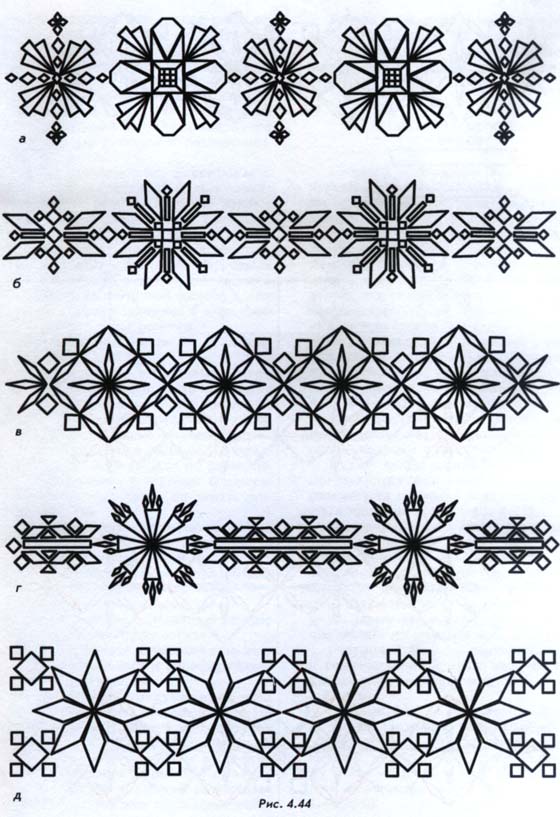 Sockets in the composition of curbs together with the support of the more simple elements and their combinations. As can be seen from the drawing, composition, elements of the borders are based on the elements present in the composition outlet. The pattern is easily perceived, does not look monotonous or overloaded.
The order of execution of the considered borders combines technology performance of simple borders and rosettes. Border with rosettes (figure 4.45). The composition of the curb constructed on the basis of sockets with 8 beams, which are placed in a grid of rhombuses; as additional elements included in the composition of small squares.
Materials:
5-6 thatched strips of width 3 mm to run diamonds, 3-4 strips with a width of 5 mm to complete the squares; the length of the ribbons is 15-18 cm;
wooden base, lacquer, brush, knife, pot, pencil, compass, ruler.
Execution of the work.
1. Perform the layout of a border plane (figure 4.45). Draw a line with a length of 170 mm, it will determine the position of the longitudinal axis of symmetry of the border and its size. At a distance of 85 mm from the edge line mark the middle of the curb and construct a perpendicular.
The right and left of the perpendicular from a point mark on the horizontal line the position of the outlets and the point of intersection of lines that form a grid around the outlets. In our example the neighboring points are located from each other at a distance of 20 mm. Point on the Central perpendicular corresponds to the intersection of grid lines. The right and left of it are located the outlet, and then again the intersections of grid lines, etc. In the locations of the outlets draw lines that will determine the position of the rays of the rosettes. One of the lines perpendicular to the horizontal road marking lines, the other two located at an angle of 45° relative to the marking line. Mark on the guide lines rosettes the size of rays equal to 13 mm.
2. The implementation of the border start with sockets (figure 4.45 g). Their location and position of the rays defined by the points and scribing lines.
3. Run a grid of rhombuses around the outlet (figure 4.45 d, e). First, lay out the diamonds, which set the grid intersection on the center marking line (figure 4.45 d). Their position you can easily determine if the position of one of the acute vertices of the rhombus at the point marked on the axis marking line and a second vertex connect with the top sloping beam outlet.
4. Finish the ends of the border diamonds (figure 4.45 d).

5. Complete mesh around the outlet (figure 4.45). Grid lines converge in points that lie on the vertical marking lines of socket.
6. The last complete the squares (figure 4.45). For accommodation check with the sketch of the curb. Squares run the ribbon width of 5 mm.
Given the sequence of execution of border is largely universal and can be used in the future when you run a complex ornaments:
1) preparation of sketch;
2) preparation of a straw ribbon;
3) the marking plane;
4) the implementation of the elements of the ornament from the Central to the peripheral and subsidiary.
Each of you invented ornaments will require the development of the individual components of the scheme. It will depend on the complexity of the composition and its individual elements, your skill and level of readiness to perform a particular ornament.
Now you can run the border of the shown in figure 4.44 a—d, or any other, the sketch of which you can think of. 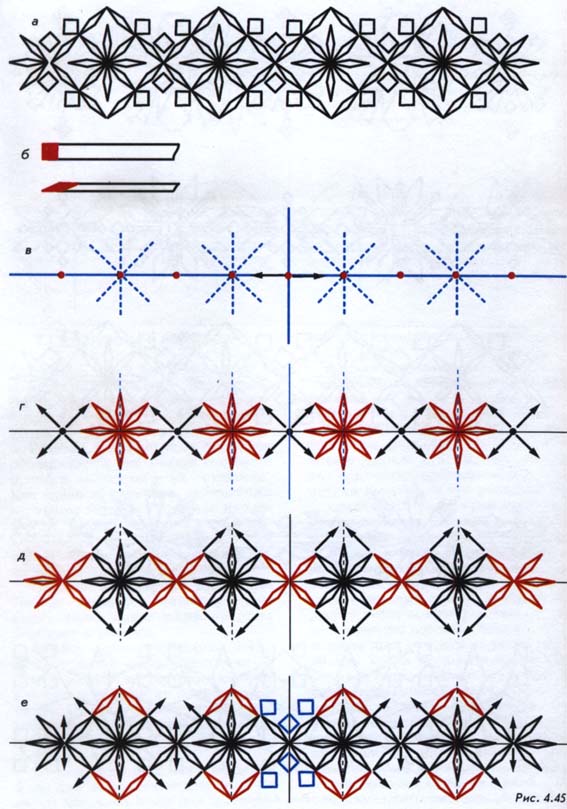