The history of the emergence and development of straw

The history of the emergence and development of straw

Weaving is one of the oldest crafts developed by man. Mostly it was used for plant materials, common in different parts of the globe. The tradition of using straw man of cultivated cereals for weaving was a continuation of the tradition of weaving of wild plants and the worship of a man dying and resurrecting deity of the vegetable world. Formed two main trends in the manufacture of wicker man made of straw goods. One had a ritual significance, and their origin led from the sphere of beliefs and worship of the person of the Supreme deities of nature, the second relates to the sphere of material human life. Rural residents involved in agriculture in different parts of the globe, used straw in life. It covered the roofs of the houses, it was spread domestic animals; of straw made mats and insulation mats, a variety of utensils for storing, carrying food and clothing; she made hats and shoes, and in some countries, elements of outerwear. The first cereal which began to cultivate people, is wheat. It spread from the steppe regions of the near and Middle East (Mesopotamia, Palestine, Syria) about 8 thousand years BC the Most ancient pictorial evidence of the cult of wheat are drawings of the Egyptians, which shows the cultivated wheat fields (photo 1).These drawings are dated 5-3-th Millennium BC, There is strong evidence of this in the earlier mythology of the Egyptians. Osiris and ISIS embodies the masculine and feminine as symbols of spiritual and earth (heaven and earth). The earthly parent cult that has developed around the deity ISIS, was one of the earliest cults in which the seed was given to the symbolic role of the deity. 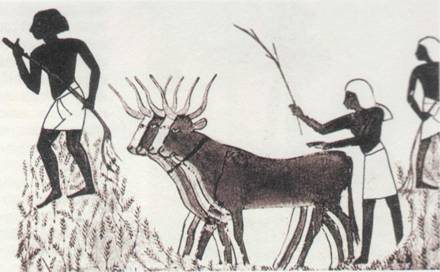 On the shards of Egyptian pottery from the graves, the researchers find prints products and tangles of straw. The reason for the creation of these products historians refer to the same belief in the divine power of the grain, stems, and some woven products of straw. These views were deeply rooted in the beliefs of the people of the past. They were largely based on fear of yield losses and threat to life. In most world cultures the belief in a spirit or God of the harvest, who lives in grain and whose house the person destroys after harvests, was very strong. Known in many countries, weaving in the form of cells, wreaths were designed to serve as a temporary shelter lost their home to the Spirit of the field. The same symbolic importance, and the last sheaf, which is kept until the next agricultural year, the beginning of which, during plowing the fields (photo 2) Spirit returned again in his element and was to be reborn in the new crop. In North Africa, Egypt, and currently you can still see the so-called the cage, woven of straw with the ears, they are known to other peoples of the world. These products are one of the oldest and originated from the weaving of the first farmers. According to pagan beliefs in the cage after harvest were staying with the Spirit of the corn, he dwelt there all winter, guarding the house and its occupants from evil and misfortunes. Cages hung outside the door of the house and barn. With the advent of Christianity this symbol in the countries of Central Europe became known as the "blessing house". 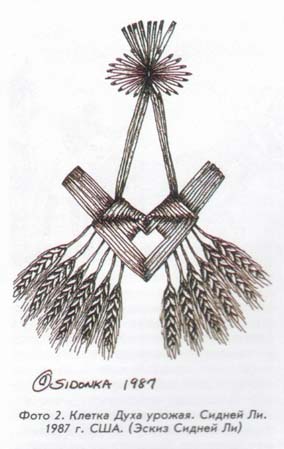 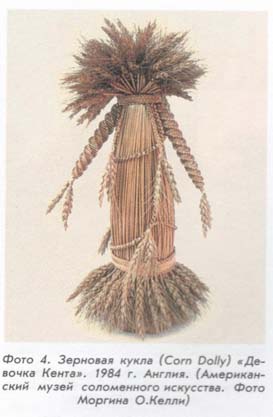 Gradually braided ritual articles have lost their symbolic role, and she became less and less obvious. These products are seen as an integral part of the cultural heritage associated with the harvest and the beliefs of the agricultural peoples. In Europe, netting harvest jewelry has acquired a competition in which each owner tried to fulfill your decoration as good as possible in order that it was chosen as a symbol of the harvest of the village. Such events contributed to the development of new art forms and various kinds of nettings. Most forms of harvest decorations, currently known and specific to the traditional, emerged in the 16th-18th centuries. The more developed the decoration of these product retains the origins of the simple archaic forms that are close to the faith and the symbol of the house of the spirit of the grain (figure 4).Ornaments of straw was done not only to the harvest festivals, they were also used as a sign of attention and sympathy. The characters vpletennyh a variety of braided knots and hearts are widely distributed in Europe. For example, in the East of England kid, coming out to the girl who was supposed to have the wheat stalks. He could be alone with a girl provided that its hands are filled with weaving. At the wedding the groom gave his bride woven of straw "love knot", which symbolized the strong ties of marriage. Design of "nodes" was sometimes very difficult, they were carried out such as to show the ability of the groom, his ability to work (Fig . 5). 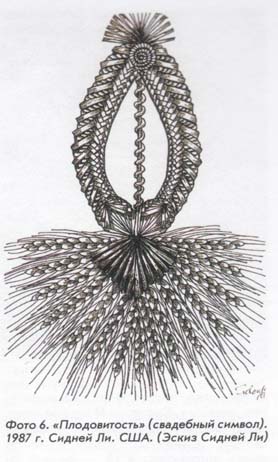