The history of the Belarusian straw

The history of the Belarusian straw

In Belarus plaiting of straw has long been engaged. Behind this craft more than one thousand years. It leads its history from ancient rituals associated with the cult of bread and straw. Our ancestors believed in the divine power of straw and grain, saving yourself viviparous power of nature and generously gave it not only the stems and stalks of the new harvest, but all who in any way comes into contact with them. So venerated last sheaf harvested from the field, which was kept in the house until the next harvest. Straw farmers have linked their future life, giving her the role of the teller in many Christmas divination. The grain showered on the young wedding, and the young were put on the straw to the power plants was passed to the young family and their future children. Countless beliefs and rites connected with straw and bread. Despite the variability of the world, they came to us from distant pagan times and continue to live with us in the form of the works of masters. Straw "spiders", horses, birds, dolls are not just images, each of them is connected with the person who created it, came into contact with him, by invisible threads of hopes and aspirations which they symbolized.
Throughout history, man could not do without hope for help and support, the misunderstood them until the end, supernatural forces. He gave them images that accompanied him throughout his life. The figures gave the young at the wedding, each other relevant parties, large image of carnival, Madder did during rites of mass sacrifice by burning or drowning.
Ancient customs of the manufacture of straw ritual animals, dolls came into our lives. Become a subject of creative work of many modern masters and artists. Modern people have largely lost faith in the divinity created them. What is surprising though is the strength and power of folk traditions stepped through the centuries and continue their existence.
To say that the fate of Belarusian straw was all the time happy, of course, impossible. Like any other fate she knew periods of prosperity and decline. Belarusian straw can be proud of the periods of its high takeoff in the late EIGHTEENTH and early nineteenth centuries. At this time the Belarusian masters was created, unique in the history of art, straw Royal gates. To our days there were three of the king's gate, two of them are kept in the Museum of Belarusian folk art village Raubichi near Minsk, one in the Grodno historical and archaeological Museum. It is assumed that the straw design was entire iconostases in the Uniate churches. 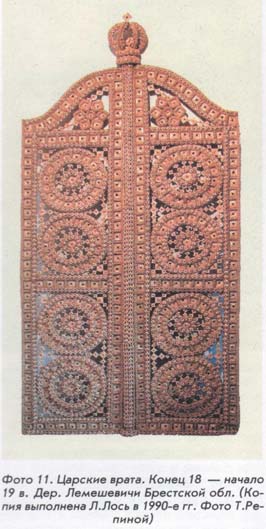 The decline in the straw after takeoff in the XVIII - early XIX-th centuries, began in the mid nineteenth century. Straw images of animals and birds has lost its ritual significance and has gradually moved to the rank of toys and trifling amusements, the manufacture of which was not always in the hard, everyday peasant life.

Straw household products for food storage, grains that were essential in peasant life for centuries, though slowly, but also were replaced with modern products. Although strength they could compete with any of them. Containers made in spiral netting, had a variety of sizes and shapes and are widely used in agriculture. The largest could accommodate dozens of kilograms of grain. They were hygroscopic, they are not chewing mice. These invaluable qualities of straw utensil made their lives among the peasants, more long-lasting than plastic. And even in the 1940-1950 years, some farmers produced these products for yourself.
New take-off in the history of Belarusian straw began in the 1960-ies. Since that time, the straw became rapidly enriched with new techniques of weaving. Vividly and variously developed artistic side straw products. Modern straw appeared Names. And this is one of its hallmarks from the straw of the last - nameless, leaving to history a single name of a master.
The ancestor of the modern straw was the Belief of the I. Gavrilyuk (1904-1986). She revived the ancient method of making straw figures, which still remained in the memory of villagers .
Vera Ilinichna became a founder of the art of fishing on the Brest factory of art products. Her successor was the master of Mogilev Ekaterina Artemenko.
Such seemingly incongruous qualities of the straw, as the intractability and resistance to any violence of straw stalks and incredible plastic braided straw and ribbon, opened the masters are great creative spaces. 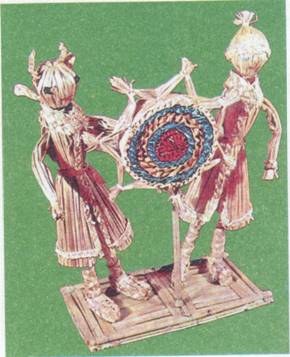 
Unlike the crafts of the past centuries, emerged and developed in the rural environment, centers for contemporary straw in our days, steel city, and dealing with the art people are generally very far from agriculture. Straw was the material with which they Express their feelings and thoughts, show the world, and evince his attitude. Household lost its original ritual purpose, the straw is saved and develops your contemporaries as one of the greatest cultural and spiritual legacies we have inherited from your ancestors, showing a great range of their decorative properties. Belarus is one of the few countries in the world where the straw has received intense modern development. In most developed countries of Western Europe, America, Asia, straw weaving moved into the category of a hobby. Fans and enthusiasts of this art throughout the world engaged in the preservation of its traditions. Members of the national Guild of straw going to international meetings and festivals, conducting master classes, which are studying the features of national schools of wickerwork. In 2001, masters from England, America, Australia, and Hungary, visited Belarus. The level of work of Belarusian craftsmen and artists working with straw, was regarded by them as a benchmark of contemporary art of wickerwork, has preserved and developed a strong national identity.
For acquaintance with Belarusian craftsmen and the national school of straw on the straw festival in 2003 came to more than 40 artists from different countries of the world. It was their first meeting with the Belarusian land and its masters. Modern straw keeps the experience of previous generations, but the straw had not yet revealed all its secrets to man, and it will make the masters of the present and the future.
Belorussian art of straw, thanks to the work of artists, craftsmen, art critics, adequately included in the Treasury of achievements of world culture. The development does not stop today, it's gaining new fans, attracting talented teachers gifted and talented students.