Square (photo 93). Squares woven on a frame, widely known throughout the world. For example, the peoples of South America weaving is called Gods Eye (God's Eye). In the 19th and 20th centuries, this name was borrowed by the inhabitants of the New world, then spread to Western Europe, England, Australia. To our days in Mexico are preserved the tradition of giving to the child at birth a straw cross is woven from five squares on a single frame. This amulet was supposed to protect the child during the first five years of his life (five squares to five years). The perfect rhythm of the weave symbolizes the harmonious development of the child, protecting him and giving strength to resist disease and evil. A similar tradition exists among the natives of Australia. They braided square on the wooden frame of the herbs, as a symbol of development and protection. Perhaps, the same symbolism carries this item in Belarusian the king's gate, and sitophobia straw "spiders", which was common in Western Europe. 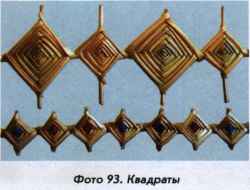 Woven on the frame squares and polygons are used by the Belarusian craftsmen for many centuries and is very popular among the modern masters of straw. They serve as a basis for designing and creating boxes, decorative household goods, panels, Christmas ornaments, these netting can often be found in the decoration straw sculptures.
The basis of the woven squares and polygons is the frame. In the past it is traditionally made of thin wooden sticks. Of modern materials best suited soft wire with a diameter of 1.5—2 mm it can be inserted inside the straw tubes to hide the metal.
Consider the sequence of manufacturing of woven straw square.
1. To make the frame take 2 of the same piece of copper wire with a diameter of 1.5—2 mm and a length of 4 cm. Insert each wire inside a straw tube with a length of 4 cm and an inner diameter corresponding to the diameter of the wire.
2. Tie the wire in the middle part of the right-angle cross pattern. The connection should be firmly connected and fixed node. The ends of thread for binding loose at 8-10 cm but don't cut.
3. Working take a long straw from the top of the stem with a maximum diameter of no more than 2-3 mm. the Thin end of the straw put on the frame at the intersection so that he advocated the intersection of 5-10 mm, and firmly bind the left ends of the thread. Thread, trim, lace up drip a little glue to secure (figure 5.57 a).

4. Private working culm criss-cross binding sites in order to mask the threads (figure 5.57 b).
5. Consistently wrap the frame of the working culm, choosing one direction (figure 5.57 b), the coils lay close to one another without gaps. The protruding tip of the working of the straw weave, bending it to one of the wires of the frame.
6. After weaving, the end of the working straw tightly bind to one of the wires of the frame and carefully remove the excess part of the stem, cut it along the line of bandaging. Can the end of the working straw to fill under the previous round and the excess part of the stem to cut along the sides of the square. Attaching netting secure with glue.
Braided square has two sides with different patterns of weave. The face-traditionally considered to be the one where the straw turns form a continuous smooth surface and hide the frame.
The protruding ends of the frame, if necessary, can serve for fastening the square to the other elements. If they do not will need in the future, remove them with pliers.
Polygons, woven on a frame, performed similar to that described above. The difference is the number of elements of the frame. To perform a polygon with an even number of sides are the base for the frame, under contact equal to each other, angles and plaited working culm. So are six-, octagons, but there may be elements and with a large number of parties.
If you want to perform an element with an odd number of sides, e.g. a triangle, the frame, prepared for square, connect two rails together, and the rest is diluted at equal angles to each other 120°.
Next, the scheme performs the weaving of the working culm. Connecting the two rails together, you can get any frame to complete polygons with an odd number of sides (figure 5.58).

Woven frame elements can be supplemented with small decorative details. In Belarus, the artists often decorate the middle of the square panel of fabric or threads of red or blue. Before you do the insert, do the working first culm 2— 3 coils. On top of the coils on the front side of the netting lay a piece of fabric or strand of thread. The ends of the overlay elements should get on the wrong side of the square. Hold the box, continue to follow the weave.
Squares and polygons can be done with a textured surface. To do this, change the direction of the taping of the working culm guide frame (figure 5.59 b). The rhythm of alternating high and low relief, you can ask yourself, however, for he was well read, better to do between taking turns is not less than 3— 4 turns. 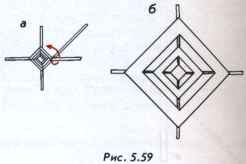 If you use as a frame wire, it is possible to perform three-dimensional elements in the form of pyramids and with a large number of the guides to make these elements spherical and spherical shape. This technology made hats using up to 16 tracks.
Chains of squares. In some cases, to perform the art products and decor you must have a chain of squares or the whole grid. To do this, create solid frames.
When performing chains of squares as the basis of the chain is taken one frame wire, which subsequently will be located all of the combined squares. A wire insert inside the straw tube. Then follow successively the squares. Starting from the long edge of the frame, impose the first short rail link at the intersection of operating a straw and shoot the first square. The following short guide cable at a distance from the first guide equal to the diagonal of the square (figure 5.60). Consistently follow the entire chain.

In the manufacture of frame elements try to stick to the following rules:
performing a series of frame elements, choose working the straw of the same diameter;
as working Solomin choose a straw from the top of the stem with a maximum diameter 2.5—3 mm;
the thickness of the working straw is chosen according to the size of a running element: the smaller the item, the more thin straws used for its execution;
performing consistently on the same frame multiple items, finish each item from the next — this way you will mask the tied ends working Solomin.