Braid "chain" of 2 Solomin (photo 95). Weave a "chain" of two Solomin is one of the most common surround weaving. It is very plastic, miniature, and thanks to these qualities became one of the main used for making small delicate decorative items. Netting is widespread in all areas of modern straw of both Belarus and other countries, it can be found in the decor elements and straw sculptures in the decoration straw household products, Christmas toys and decorative compositions.

Network, usually made of a small length (the size of the straw), as certain difficulties arise when extending working Solomin. Netting can take two types of cross sections — triangular and rectangular.
1. Take a long straw from the middle part of the stem with a diameter of 3 to 4 mm. Fold it in half and pinch the ends at an angle of 120° (figure 5.63 a). Working culm straw is lying on the bottom (in the figure is a straw 2). This situation Solomin is the starting position to complete the chain with a triangular cross-section. If the straw to breed at an angle of 90°, the network will have a square section. The fundamental difference between these two braids will not. The only thing that distinguishes them outwardly from each other, is more dense interweaving the braids with triangular cross-section. 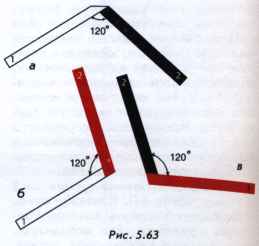 2. Working straw 2 fold itself around the straw 1 and place on top of the straw 1 (figure 5.63 b) (the crest line is along the straw 1). Between the straws keep the angle 120°.
3. Working through a straw 1 straw 2 fold (figure 5.63).
Then follow the description from step 2. After the weaving of the straw 1 and 2 tie together and stretch it slightly in his fingers. Chain kinked in half made of straw, has a length of no more than 10-12 cm If you require a more long braids, you can proceed as follows. Take 2 straws of equal diameter and length (can be used as the straw from the middle part of the stem and the top). Straw tie together the ends apart at the desired angle and begin braiding. In this case you have netting over 20 cm in length, without joints.
Braid "chain" is very plastic. In the wet state it is possible to fix threads or needles, take the form of spirals, volutes, rings. After drying, the braid holds shape.
Braid "chain" of 3 Solomin (photo 96). Weaving is a complex pattern that looks similar to the combined two "chains" of 2 Solomin. Its decorative qualities and plasticity it is similar to the previous braid.

1. Tie together 3 not very thick straw is equal to the diameter and length of the middle part of the stem. Spread all of the straw at an angle 120° to each other (figure 5.64 a). 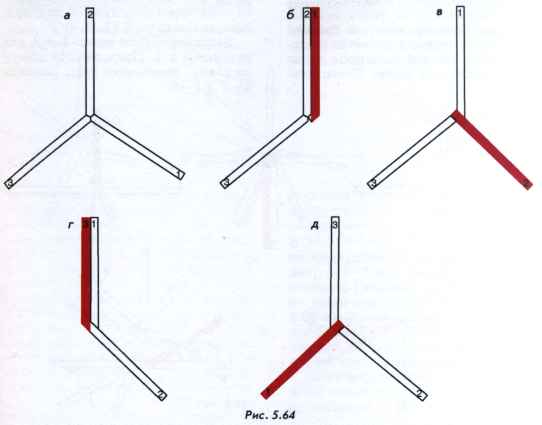 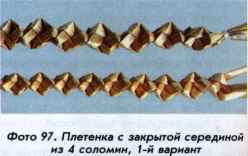 1. Take 4 not very thick straw from the upper or middle part of the stem of equal diameter and length. The length of each straw should be at least 15 cm, diametr — 1.5—3 mm. Tie the straw together and apart relative to each other at a right angle (figure 5.65 a). 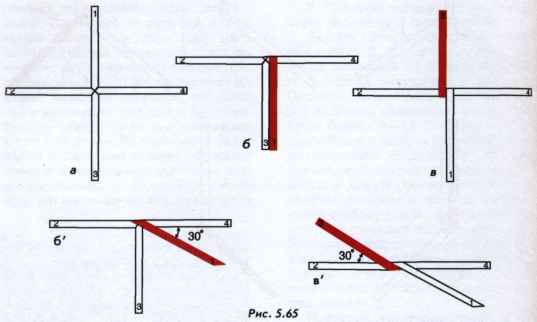 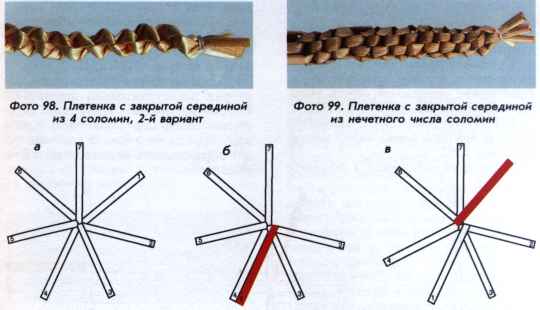 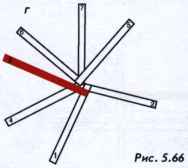 1. Take 7 straws of equal length and diameter. One of Solomin insert the wire, this straw will be the base for the weaving. Tie the remaining six straws around the frame (figure 5.67 a). 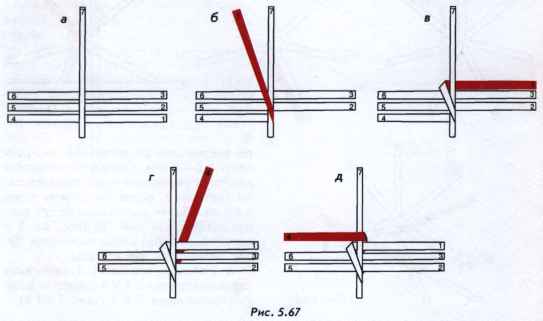 2. Working straw 1 point up and slightly to the left front of the frame (figure 5.67 b).
3. Working culm 1 go around the frame 7 and put a straw right working 1 on culm 3 parallel to it (figure 5.67).
4. Working stubble 4 upwards and slightly to the right behind the frame (figure 5.67 g).
5. Working culm 4 go around the frame 7 and place a straw working 4 left over culm 6 parallel to it (figure 5.67 d).
Next, continue weaving, sequentially repeating steps 2-5. A group of right-wing 3 Solomin will form the front of the netting. A group of left 3 Solomin will form the back part of the weave.
Braided cord "rope" of 4 solomyn (photo 101). Weaving has long been used by Belarusian masters, known to the masters of other countries. Braid is very flexible and durable, can be performed on the frame.