Surround. netting distributed on the territory of Belarus and other countries of the world, quite diverse, though inferior in number, flat weaving.
Bulk netting can be divided into 2 main groups:
cords (three-tetrahedral, circular, chain);
twisted netting (twisted braids of 4, 5, 6 or more straws).
Of these two groups of Belarusian craftsmen for many centuries use in their work in the main weave of the second group. These netting known in the works of the masters of 18th and 19th century such as the Royal gates, crosses, caskets. Modern masters continue to give preference to these kinds of three-dimensional weaving, using them as the main structural elements and decoration products. They are used in the manufacture of decorative household goods (boxes, baskets, bread bins), panels, Christmas ornaments, sculptures.
Of three-dimensional weaving of the first group among Belarusian masters was widespread in the main chain and round cords. The rest of the weave, although used for the manufacture of wire, lace, leather goods, among artists, solomatnikov not spread.
Diverse variants of netting surround the cords preserved in the traditions of wickerwork peoples of Western Europe, England, where it spread to the Americas and Australia. They are used when creating elements harvest and Christmas decorations, modern decorative compositions.
Surround netting complement and make a more diverse range of textures of flat weaving. In his works, the master combines them with flat frame and weaving. The surface of the volumetric weaving have a pronounced relief, which may be twisted, ridged, scaly texture. Billing volume of weaving reveal the richness of black and white scales straw from very light colours on the surface to muted and dark tones within the weave, greatly expanding the decorative qualities of the products.
Surround netting is very flexible, they easily bend and hold hands. In order to fix the shape, voluminous braids sew. To give the form of greater stiffness, bulk netting, having an inside cavity, weave on a wire, wooden or straw pallets. Curved when wet, they retain their shape after drying. Features of some kinds of three-dimensional weaving will be discussed below, studying the methods and techniques of their implementation.
Surround netting rose from 2 Solomin (photo 94). Netting is very popular among the masters of England, Holland, America. It is used to make small decorative elements in the compositions and harvest decorations. 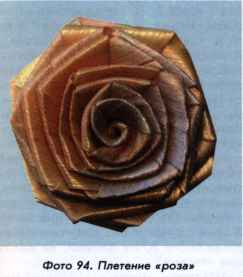 1. Starting weave, take 2 identical straw from the top of the stalk, which have a pronounced conical shape (should be pronounced difference between small and large diameters), length 20-25 cm Fold them crosswise from the thin end at an angle of approximately 30° (figure 5.62 a). The ends of the lock clip. The intersection should be from the beginning Solomin at a distance of 3-4 cm. 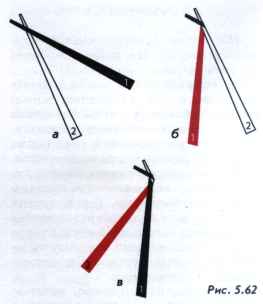 2. Working stubble 1 laying on top, fold around a straw 2 (figure 5.62 b).
3. Working fold around a straw 2 straw 1 (figure 5.62 b), between the straws 1 and 2 remain permanently at a sharp angle.
Netting will acquire the form of a helical ribbon with a gradually increasing diameter. After weaving ends Solomin knot. If the thin ends of the straws to miss inside the netting, strung as if they all braided, and attached to the lower ends, it is possible to obtain a decorative element, reminiscent of a rose flower.
Instead of round Solomin you can use a straw ribbon, with a smooth extension at the length.