The stylization of natural forms

The stylization of natural forms

Compositions and objects, stylized for curved application, can be further stylized geometric appliques and Vice versa. This possibility creates the conditions for the enrichment of compositions performed in two different techniques new decorative techniques and forms.
Two stages of stylization of forms from curvilinear to geometric, you need to add another one that will meet them — the analysis of real objects and shapes. Work on the styling of the facilities will have the following structure:
the total analysis of the object (composition, character);
a synthesis of forms and the exclusion of depiction;
the definition of the emotional nature of the subject (composition) and creation on its basis of a decorative image.
In figures 4.73—4.75 examples of stylized plants, birds, animals, man made techniques for geometric and curvilinear applications. 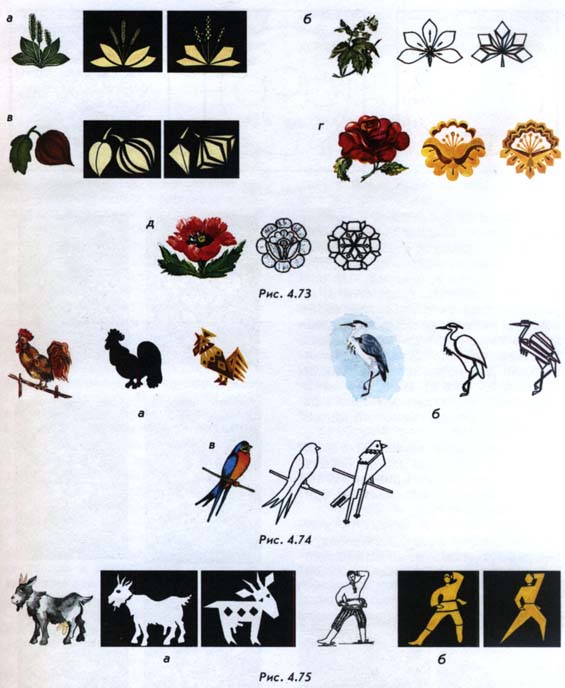 For each image revealed the General characteristic shape and internal properties. For example, shown in figure 4.73 and plantain is a low arrangement of leaves emanating from a single center, and thin inflorescences on long stalks. The shape of the rose flower (figure 4.73 g) feature to deploy the petals and their abundance. The poppy flower (figure 4.73 d) the petals open up the middle part of the flower, and it can have an impact on the detection of zones of styling their proportional relations. Examples of descriptions for figures are not a comprehensive analysis of all forms, provided only the characteristics of them, which can be based on styling decorative accents which will focus attention of the author.
After a General analysis is a detailed elaboration of the elements of the form, assesses the structure of the petals and leaves of plants, their location.
In animals and humans identify the key elements in the structure of their images, and the necessary generalization. In each element are identified and developed its main qualities, which would become the basis for the development of decorative images.
The result of the first form of styling is the creation of a decorative image, built on loose lines and shapes that are adapted to the technique of curvilinear applications.
The basic requirements that must be met by the composition and its elements in a curved application:
the smaller the object, the easier should be its composition and form of the elements included in its structure;
all items must be made in the same style;
all image elements must have a clear closed contours;
lines that are the boundaries between adjoining elements must have a complex shape.
Further, on the basis of styling, made for a curved application, hold the styling to accomplish the same images in the technique of geometric appliques. Use already developed the structure and arrangement of elements for each decorative image. Derive analogues of geometric forms each of the curved elements. Such options can be developed very much (figure 4.73—4.75).
The options and decorative images for different techniques of application show the infinite variety of possible solutions to the tasks of creating decorative compositions. Similar styling individual objects from curvilinear to geometric shapes, you can draw a stylized decorative compositions. Figure 4.76 a—b and photo 42 shows an example of stylization of the decorative panels from curvilinear forms to the geometric.