Our work of straw 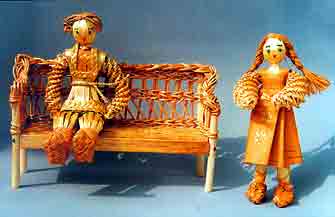 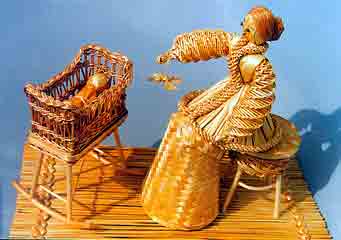 For making straw dolls will need thin and medium-thick strips without kolentsi. First straw soaked in warm water for 15-20 minutes. As soon as it becomes soft to the touch, begin to work.
Skeleton dolls made from the softest light of straws with a diameter of 2-4 mm. There should be 20-25 pieces.
So, tie the straw strong thread to the bundle (figure 1).

Figure 1. Tie the straw strong thread in a bun — get the skeleton doll

Wrap the shorter part of the beam of light fabric to give the head a more rounded shape (figure 2).

Figure 2. Wrap the shorter part of the beam of light fabric.


Remove the beam in such a way that the straw is uniformly closed the place, covered with cloth (figure 3).

Figure 3. Remove the beam so that the straw is uniformly closed the place, covered with cloth.

Carefully put the straw where the doll's face.
Again tight drag a bundle of threads. Will head doll with a long beam-trunk (figure 4).

For the manufacture of arms will need copper wire and strips from the top of the stem (the apex). Six straws of the same thickness tie tight wire, which will serve as the axis. Spread straw from the centre to the sides (figure 5).

Figure 5. For making hands firmly tie to the wire six straws of the same thickness and move them from the center to the sides.


Hold the beam in his left hand. Braid from the bottom up. Right hand any of the six Solomin fold myself right of the axis through the two straws on top. Rotate the weave 90 degrees counterclockwise. Take your right hand a straw out from under the working and shift it again after two of the straw from himself to the right of the axis, and so on around the circle. Of the six Solomin is formed the Pentagon. On one corner there are always two of the straw, the lower of which is shifted farther in a circle using two of the straw (figure 6).

Figure 6. In a circle every time you put a straw under working in two of the straw from himself - get a Pentagon.


When the bottom straw out from under the upper, the movement of the right hand recalls the twist of two wires, wherein the hand force evenly distributed on both of the straw. During operation, care must be taken not to lose the shape of a Pentagon, and its dimensions to the middle of the sleeve with each round increased, the working straw a little to take the outside. After the middle of the sleeve the size of the Pentagon should be reduced, removing working a little straw inside. The principle of weaving has not changed.
In the process, gently add the straw, braiding them joints in the edges of the braids. At the end of the weave the straw again pull the wire tight.
Two of the sleeve join together, recoiling the wire. The connection wrap a strip of birch bark, making the breast of the doll (figure 7).

Figure 7. The two arms join together, recoiling the wire. The connection wrap a strip of birch bark.

Insert hands into the bottom of the beam the torso, dividing it into two parts (figure 8).

Figure 8. Insert hands into the bottom of the beam the torso, dividing it into two parts, under the arms place the additional beam.

Arms put extra bundle consisting of 50-60 Solomin.
Connect additional beam and of the beam-body, tight, tie them at the waist. With scissors trim the ends of the straws at the bottom of the skirt. The bottom of the skirt and the waist can be decorated flat braids are of different thickness, such as a network "three" (figure 9)

They also decorate a sweater and an apron.
Hairstyle doll also make from natural materials: birch bark, bast, split straw.
Men's straw figure easy to perform the type of female, forming a skirt instead of legs. This beam is split in half, tie each half at the bottom in two places at the distance of 2-2,5 cm, fold - out feet.
Sandals can be done by wrapping the feet flat braid.
In the last phase of work on the dolls all the cotton bandaging, close woven ribbon or smoothed straws, simulating the items of clothing.