When working on complex compositions it is sometimes necessary to introduce elements that are larger than the width of a straw ribbon. In such cases, to perform elements of the composition of a large area using decking.
Execution technology flooring is simple. Straw tape the same width are glued to the ground of the decorated surface, tightly butted to each other. This forms a solid surface, recruited several straw ribbons.
The property has a straw ribbon to perceive different luminous flux, changing color shades, can be used to create a variety of decorative black and white effects in flooring, changing its direction at different angles. Using different direction of flooring, you can create solid images of animals, birds, people, highlighting individual elements of their silhouettes as decorative parts of the composition.
Decks may contain ornamental plots in which elements of straws will be in rhythmic unity with parts of the background. Section of the ornament can be considered an insert, if the size of the ornament is not more than 1 /3 of the area of the flooring.
It is possible to distinguish two types of flooring: straight (figure 4.59 a) and fan (figure 4.59 b).

When performing direct flooring the adjoining side of the straw strips are parallel to each other. Typically, these decks are filled with the elements of the composition, which have a distinct orientation: top — bottom, right — left. The form of such elements may describe correct and incorrect three-, four -, and polygons.
The items that represent a symmetric figure, or fragments thereof can be performed fan deck. Examples of such shapes can serve as the outspread wings of birds, items of clothing to human, plant forms. To perform the rolling deck of the straw strips are cut sections of triangular or trapezoidal shape. On the plane they stick tightly butted along one of the sides. Radially directed fibers of the straw tape create the effect of the unfolding of a fan.
In one composition may be applied to different areas of the flooring. The vertical direction of straw ribbons can be combined with the horizontal direction, forming a right angle. Decks can be placed at arbitrary angles relative to each other. A change of direction in the decking and decorative combination — techniques that can be used when developing compositions. Examples of some possible mutual arrangement of layers on the plane as well as the combination of two types of decking: live and fan is shown in figure 4.59 V.
Figure 4.60 shows an example of composition, which combines direct and fan decks. Direct the deck in the center of the composition are located in two directions and are joined at a 90° angle 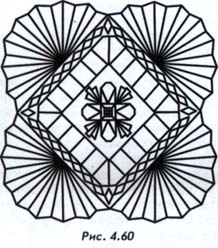