Connection of beginning and end is called lining. The word itself already defines the most simple method to complete the work. This method consists in the fact that at the end of the work polotnyanko depleted before — Zaplata. Equity pairs polotnyanko connected with eyelets Zaplata. One loop has 2 strands of pairs of comers, or rather, a pair of bobbins on one loop Zaplata. Make the hitch, tie threads and cut them at a distance of 10-15 cm from the knot. After removing the work cushion in each thread inserted the darning needle, and thread carefully prostoyala to polotnyanko. 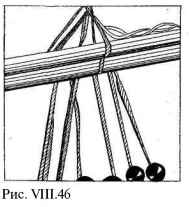 Not doplata prior to (Zaplata) 2-3 cm, begin to prepare the bobbin for sewing. The lining serves only the equity of a pair of centre and suspension and extreme equity pair stitched to the end without any change. The thread from the eligible equity pairs terminated. Length of the dangling ends must be up to 20 cm Ragged ends fixed to the pins going in the pillow. Folded twice, these threads form long loops, which pass through the separated yarns on the bobbins. The threads are folded in half, wound around the bobbin and are fixed, as in the winding of threads on the rod (figure VIII.2 in the article, winding the threads on the rod). Preparation is over. Continue netting until polotnyanko Zaplata: suspension and extreme equity is unchanged, and in the center — dual warp of polotnyanko. Then running a pair engages with an eyelet of the extreme equity of the pair, which started the weave. After coupling the ends of the thread fractional extreme pairs are removed from the pins and previva separate each thread by their coupling with its own thread in hand. Continuing the lining, start to work with dual loops. Remove them from the bobbin, drop the bobbin thread to the side. In the extended loop is laid as a continuation of the plain weave of this thread a couple of chassis. Tightens the tip of the loop of the equity pairs so that it was flush with the eyelet Zaplata. Then you hitch with a loop Zaplata running pair. Then in the next loop of the equity running a few pairs laid adhering to the continuation of the plain weave tightens the tip of the shared loop to the level Zaplata, etc. it Should be remembered that two suitable double wire (loop) are connected to one loop Zaplata. And so to the last extreme equity pair, which running propitaetsya full Zapletal. Extreme equity pair is connected by coupling with its pair Zaplata and perevelas, carried by the ends outward. Chassis can prostaat a loop hook in the fabric.