The history of leather goods

The history of leather goods

Leather is one of the oldest materials used by people. Ancient people sew from her plain garments, made snares, belts, bags, shoes... Despite the purely utilitarian items, even then people tried to decorate them.
Leather is not as durable as metal, so it almost reached the ancient samples. But some idea of them we can be, considering the products of the peoples who not so long ago were the same lifestyle as ancestors.
Almost all items produced from the skin of the Indians of North America. Despite the primitive tools of treatment, they knew how to make and sturdy covering for the shield or housing, and durable shoes, not afraid of no rain, no snow, and the soft, thin suede loafers. The product was decorated with a fringe of different lengths, embroidered leather straps, dyed porcupine needles (later beads), applique. The application technique does not allow small intricate details, so the explanation usually was symmetrical and rounded. The geometrical ornaments were recruited from the leather bands of different shades. Turning the finished ornaments around the axis and alternating with a smooth leather pieces have received a variety of variations. Like other peoples of the communal tribal period of development, the type and combination of various motifs indicated the owner to a particular tribe, race.
Richly decorated with festive costumes of the chiefs and warriors. In addition to fringe, and embroidery, used brushes, woven straps. Women tend of their nature to desire, and decorated their own outfits and clothes for his family, as well as household items - bags, leather ware, skins that served as his bed, bags for carrying children. Fringe - the traditional decoration of leather products is considered to be a borrowing from the Indians. But it is more likely the popularity of films about Indians. In fact, this kind of decoration is found in leather goods, the peoples of different continents. It is the fringe (with metal plates) that traditionally adorn the bags, for example, the Slovaks. Many of the peoples of Europe element of the male costume has a wide waistband that fastens with the help of several (often three) narrow straps. Additionally, it was decorated with embossed, interlocking straps, metal plates (figure 1). 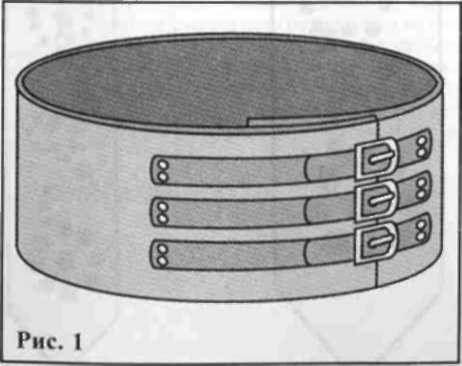 European Nations have also circulated was the simplest leather shoes, reminiscent of modern Slippers. Did she carve out together with the sole from a single piece of leather and, depending on the pattern front, had a more closed or open toe ruching on the leg and fastened with straps crisscross around the calf. These shoes became a part of folk costume for many centuries.
Scythian art, so ancient that were preserved for posterity mainly only metal fragments of ornaments, however, suggests that such ornaments were made and of leather. The famous Scythian belt buckle in the shape of a deer on the concise silhouette and a rounded outline reminiscent of the application of the Indians. Perhaps, the jewelry of this form were not only leaders, but ordinary soldiers settling for a cheap and available material.
Special attention should be paid to the products of the skin of the peoples of the North. Their differences and specific conditions of existence has resulted in the traditional native art has been preserved almost intact until now. We can only guess what techniques were used, but also to directly observe the processes of a work of decorative art. So, widely used application, often the pattern cut through two layers of leather of different colors, and then details of different colors change places. A light figure on a dark background or dark on light. Geometric patterns are assembled from triangles, diamonds, squares, rectangles of contrasting colors. These stripes adorn the bottom of the dress.
Sometimes a pattern of black and white squares is prepared differently: leather strip at an equal distance from each other, make vertical cuts through them and threaded leather strips in contrasting color - threaded so that the first strip was closed from the top, for example, odd-numbered vertical strips, while the second is even. Reception is similar to the mending. Different twisting leather strip in the vertical slots, the wizard generated a lot of interesting new techniques. For example, the leather strip goes through the slit on the front surface, purl, forming on the front of the low loops; through these loops is passed another strip (figure 2) or two toward each other. Such options are numerous. These techniques in more detail we will look at in their own products. 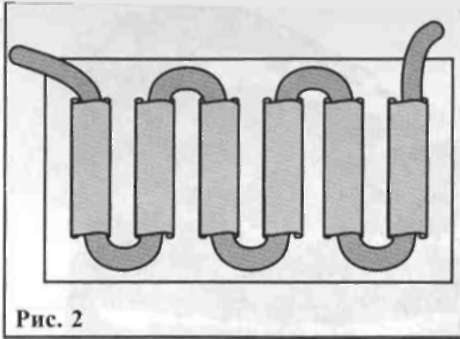 Instead of leather strips passed through the slits, were often used bunches of long and lustrous hair podanego deer. In this case, it is further sewed to the main strip with small stitches. Reception, which can be widely used in modern products, round rosettes of fur.
Studying the types and methods of design of leather goods in different Nations, taking inspiration from them or just combining in a single product, it is possible to diversify the design of items of applied and decorative arts and utilitarian products.