For hair clips you will need the flap thin red leather (the same as for Macs), the black skin of medium thickness, basis for hair the machine.
Cut-out red leather of the details of the petals - three large, small and medium (stages, see figure 82). Add the stripes with a width of 3-4 cm and a length of about 7 cm It will be the middle of the flower.

One of the long sides of the band wrap on the inside 1.5-2 cm and glue. Lubricate the strip with glue and roll in roll, put inside the beginning of the strip and turning down the bottom end.
Each petal is treated with a fire on the side opposite the recesses, so that it was curved outward. Glue the Darts.
Then turn stick the petals around the middle, slightly overlapping each petal next. First glue the small petals, then medium and finally large.

While the flower dries, prepare the base of the pins. The framework consists of two parts with attached clip. If the skin for Foundation dense enough to retain the shape, use the paper gasket. Consider this option.
Cut out of cardboard (the box from under the Shoe) detail of a heart in exactly the pattern. Leather cut out two details: one is adding 5-8 mm around the perimeter of the pattern, the second departing from the contour of the pattern is 2-3 mm inside. In a large part servuice edge, brush it with glue, put on the paper gasket and glue. Acting allowances the skin wrap the inside and glue, forming the contour of the minor folds. To ensure that leather were tightly wrapped around a cardboard base. In place of deepening the contour of the heart the skin incise to Board. 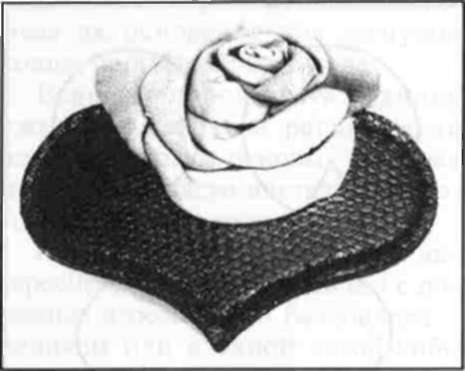 Take the hair machine (such clips without any registration are sold in the departments of products for needlework) or use the old hairpin, separating it from the plastic ornaments. Remove the arc of the spring. Put the clip on the reverse side on the second leather detail, at its widest part. Mark with a ballpoint pen the location of the vertical parts. Remove the hairpin. At the ends of the insert received lines, perpendicular to them, the lines of length 1, see the Middle of these lines should coincide with the ends of the first line. In General, the skin should get two shapes similar to the letter H, where the first line will be the crossbar. Penetrate the skin for all the drawn lines. Thread on the reverse side of the face protruding parts of the pins. Glue received the item with leather covered cardboard, leaving kesklinnas the upper part of the heart, with the deepening. Conn small flaps of skin near vertical parts.
Try rose to the top of the Foundation so that the Foundation of the glued petals were on the same side as the pin. Notice what part of them extend over the edge of the base. Cut off this portion and obliquely with the cut roses on both sides, season between nesklandumu layers of Foundation. Firmly press.
Slightly tilt the flower on the front side of the pins. Spread the petals. Secure the position with glue. Let the glue dry. You have a new original decoration.
Hairpin with rose can be supplemented with leaves and various charms (figure 83). 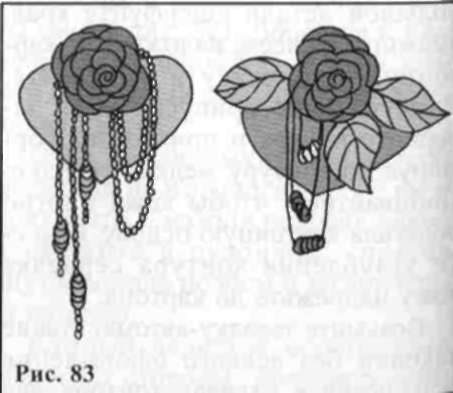