Running n/a C/b No. 10, 20 filigree — viscose, iris, embroidery thread in Hanks to rod— only 8 pairs. You can perform polotnyanko without Peravia pairs, with filigree in the center, etc. it is Desirable to carry the tie over the thick filaments.

Skolok. Length 45 cm Building two polotnyanko close to the length of the common part to 20 cm With the narrow end extending up to 3 cm on the outer edge of polotnyanko, the length of this extension, up to 10 cm Wide end, up to 6 cm and a length of 15 cm, the Filling in the centers of the extensions may be different figure VIII.18 a, b. 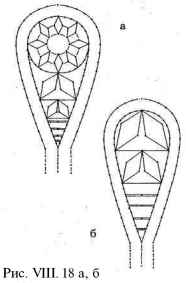 Zaplet in inconspicuous place, there; where the tie is tied in a knot. Coupling (connection) of two, matching each polotnjano to be the following: in the approach of running the pair to a nearby polotence hook injected into the loop of a neighboring polotnyanko and hooked a top-down thread running pair, we extend it in the form of a loop. In this loop we extend the second thread along with the bobbin. Pull the thread. The coupling is completed.

Where polotnyanko are located at some distance from each other, used an extra long coupling. In this case, the connection of two spaced apart from each polotnjano performed using long running threads in the middle of the distance of polotnjano is a pin, which extends from polotnyanyi running thread. Before and after running a couple of pins perebivaetsya several times, depending on the distance from polotnyanyi to the place where they put the pin. On the opposite side, at the approach of the second polotnyanko to this place, running a pair of re-lengthened, perebivaetsya several times, is the hitch to the chassis by a pair of opposite polotnyanko. And running pair, perevelas, back in polotnyanko and continues weaving.