Filigree is an additional element of weaving, consisting in the fact that polotnyanko introduced a thicker, sometimes a colored thread. Filigree is used to make the pattern definition, or to enhance its relief. Sometimes the filigree can create a pattern of lace. Filigree runs thick, not strongly twisted yarn. This is most likely iris, rayon, worsted or thread in Hanks of floss on the bobbin. You can perform a scan of the same threads constituting the lace, but it's a few additions, but when a thread №№ 10, 12, 20 in two additions, etc. (figure VIII. 19). 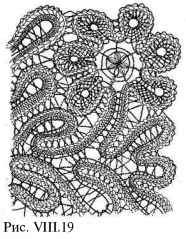 To perform a filigree base pairs of polotnyanyi apart, between them is placed a pin, on which hung a pair of filigree.

Originally a pair of filigree propitaetsya running thread polotnyanko, then, when you return a chassis pair, a pin is removed, the cloth is lifted and the weave is performed depending on the performed filigree "polotnyanko", "rope", "tree". Filigree Lacy fabric may be placed on the edge, in the center, change its position from center to edge, etc.

Execution filigree "polotnyanko" — as during normal polotnyanko. In this case, the filigree not only emphasizes the basic pattern Lacy linen, but the use of heavier threads filigree allows to reduce the number used in the weaving of steam, and thus increases the speed of weaving.

Execution filigree "rope". When netting running polotnyanko pair depleted to filigree. Thread filigree divorce up and down, and between them laid the chassis pair. Running the pair continues netting polotnyanko and return to the filigree again it is laid, and the filigree before and after the laying of a running thread perebivaetsya once. 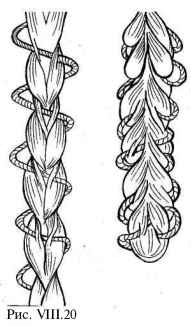